With its unusual historic triple engine sound and vintage appearance, the Junkers Ju 52 would have been as anachronistic as it was distinctive and engaging to those capturing its passage through the Alps with high-resolution mobile-phone cameras.

But the appeal of the pre-war aircraft to onlookers combined with a technological span of eight decades has been invaluable to those tasked with understanding why it dived into the rocky floor of a remote mountain valley on a clear summer afternoon.

The unconventional, another-age nature of the Ju 52 that drew attention from both tourists and locals was a curse for Swiss investigators. Built in 1939, one of over 4,800 manufactured, the aircraft was not equipped with either a cockpit-voice or flight-data recorder, meaning the inquiry into the August 2018 accident – and understanding why it cost 20 lives – would have to proceed absent the richest sources of investigative evidence.

“These days, the majority of light aircraft and gliders are fitted with a basic recording device, such as a ‘Flarm’ collision-warning device or a GPS logger,” says SUST, the Swiss authority that led the probe. 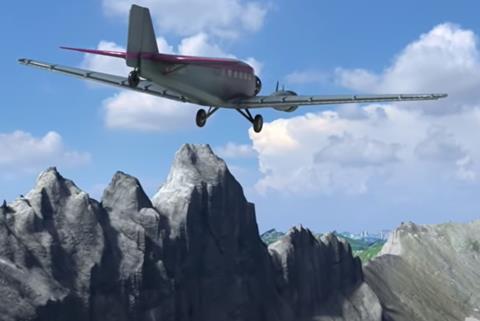 Chance favoured the investigators in one respect. The Ju 52 had taken off from Locarno with 1,140 litres of fuel and, although the near-vertical impact had destroyed the cockpit and entire forward section of the aircraft, it had been spared an explosion or fire despite a large quantity of fuel spilling from the cells.

This meant investigators could recover 44 electronic devices – including passengers’ cameras and mobile phones – that might provide vital clues about the performance, condition, and dynamics of the aircraft.

While the devices had escaped fire, most were severely damaged or contaminated. SUST recruited assistance from Graubunden police forensic scientists and the French air accident investigation authority BEA to dismantle and clean the components, and retrieve data-storage and encryption units.

SUST says duplicate phones were obtained and used to host the recovered components. “For some of the devices, this restored access to the data and allowed it to be read,” it states.

When this strategy failed, BEA used computed tomography and magnification equipment to examine the micro-components on data-storage cards. Storage chips and encryption components were removed and installed on duplicates using nano-soldering techniques, and the repaired cards fitted to duplicate phones.

This painstaking work enabled investigators to read images from 10 data-storage units, including carefully-reconstructed video using a blend of high- and low-resolution files with audio tracks from a miniature camera. 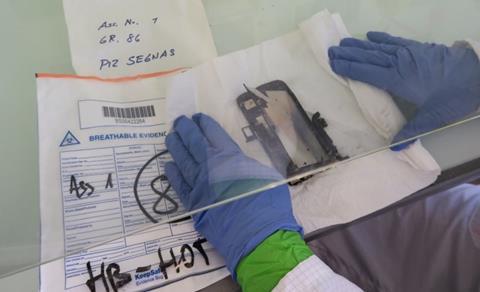 Much of the Ju 52’s tracks during both the outbound Dubendorf-Locarno flight, and the fatal return leg, was reconstructed from surveillance radar and transponder information.

But this had its limits. “Due to terrain topography, the flight path positions ascertained from radar data vary in accuracy, particularly for flights in mountainous areas, and can deviate considerably from the actual positions,” says the inquiry. “Several positions in a row may be missing, resulting in gaps in a radar flight path.”

Correlating the images taken on board helped investigators fill gaps in the radar tracks and improve the accuracy.

But video of the cockpit also allowed the inquiry to rule out an incorrect altimeter pressure setting which might have misled the pilots over the aircraft’s height as it entered the valley basin moments before the crash.

To reinforce its evidence base the inquiry sought assistance from the public, gathering pictures and video from individuals who – having opportunistically photographed the Ju 52 against the picturesque backdrop – might unwittingly have recorded useful details on the aircraft’s attitude and configuration.

Images of the aircraft, supported by eyewitness testimony, enabled investigators to take advantage of a complex analysis technique known as photogrammetry. 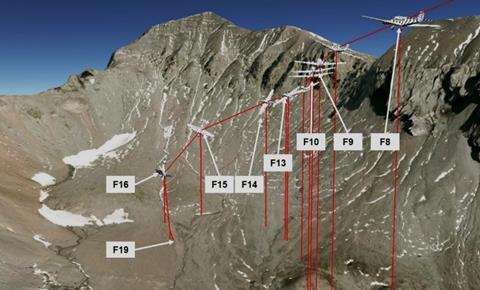 Photogrammetry enabled a 3D trajectory to be constructed from witness photographs

Photogrammetry allows analysts to extract three-dimensional information from the two-dimensional data presented on pictures or video. This work was undertaken by the Zurich forensic institute FOR which says the recordings of “random witnesses” were assembled through “elaborate” manual work.

“Hence the trajectory before the crash can be reconstructed by 3D specialists,” it says.

This was achieved by using laser-scanning the valley basin – from the ground and from a helicopter – to reproduce a high-resolution 3D model of the area in which the final moments of the flight took place. Algorithms applied to photographs of the aircraft and the terrain enabled them to be converted into 3D equivalents which could then be matched to the model.

“The level of accuracy of an aircraft’s positions and attitudes in space determined in this way very much depend on the image quality as well as the camera’s location and direction of view,” says SUST.

“Positions and attitudes can be determined more accurately if they are based on images taken from the aircraft abeam the direction of flight, overlooking a wing against a backdrop featuring distinctive terrain, than those lacking [such] elements.”

While some positions could be determined to within “a few decimetres” and some aircraft attitudes to within 0.1°, the accuracy from some “unfavourable” images could not be narrowed beyond 90m, the inquiry states.

“This margin of error was taken into account when using the values determined [during] reconstruction of the flight paths and the calculation of the ground speeds,” it adds.

Without a flight-data or cockpit-voice recorder, the inquiry faced difficulty in ascertaining whether the three BMW 132 nine-cylinder radial engines were correctly functioning before the accident.

Audio tracks from video footage enabled BEA investigators to extract acoustic information from propellers and other engine components, and use spectral analysis of the frequencies to determine rotational speeds while examining any changes in the data which might indicate technical problems.

Twenty-three video segments from footage on board and on the ground, plus a sister aircraft, were scrutinised and 10 audio tracks used to create sonograms. BEA had to account for phenomena including the Doppler effect – the apparent shift in frequency caused by a moving sound source – when analysing video from ground witnesses, and the data was compared with normal Ju 52 signatures.

The most accurate acoustic information, naturally, was recorded inside the aircraft and, as with the altimeter and airspeed, video of the cockpit allowed investigators to compare readings on analogue and digital engine-speed gauges to the sonogram data. 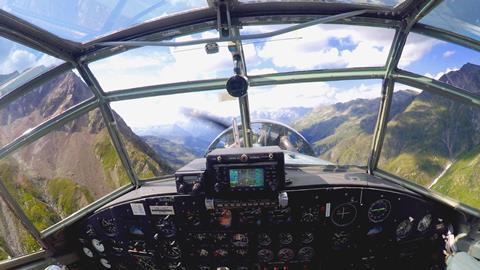 Although the acoustic data could not be linked to specific engines, rates of the engines’ crankshaft, cylinders and propeller blades could be identified and matched, because the Ju 52 had fixed-pitch propellers. The analysis noted the engines were regularly re-synchronised during the flight, a normal practice to avoid generating irritating standing-wave noise.

BEA found no evidence of unusual noise or problems with the engines and propellers, although the inquiry says the digital displays in the cockpit were much more accurate than the readings of the analogue instruments.

Investigators had to assess the complex weather conditions present in the mountains, using a range of data sources including satellite imagery, forecasts, webcam pictures, and lidar light-detection and ranging instruments.

Weather encountered during the flight was in line with forecasts which had not indicated any especially difficult conditions. But the inquiry points out that the valley basin on sunny afternoons usually experiences winds from the north-west and “widely known” is that turbulence should be expected on the leeward side of valley ridges, with the risk of thermal activity generating the “dangerous combination” of rapidly-changing vertical winds.

On the afternoon of the accident the northerly wind had an increasing tendency, says SUST, with the likelihood of more intense turbulence in the basin south-west of the Piz Segnas mountain peak.

FROM EVIDENCE TO EXPLANATION

Investigators brought together the changing wind direction and speed, the engine acoustic data, the 3D photogrammetry, and a visual examination of the aircraft’s ailerons from a passenger video to reconstruct the last few seconds of flight in a series of 29 numerical data points.

They showed how the aircraft, heading north-north-west, entered the valley basin to the south-west of Piz Segnas. The crew intended to travel along the centre of the valley and exit the basin via the Segnes Pass, which involved a left turn.

The aircraft passed through an area of wind downdraught, causing it to descend, partly compensated by the crew’s increasing the pitch attitude. Engine data suggests the pilots also synchronised the engines, reducing their power slightly, as they commenced a slight right turn in preparation for the left turn to the exit. Focused on the engines and with few visual references, the crew’s pitch increase might have been subconscious.

But it left the aircraft close to its angle-of-attack limit and, as the turbulent conditions quickly transformed the downdraught to an updraught, the aircraft – which was longitudinally unstable, because it was flying out of balance – began to stall.

SUST found the aircraft had a true airspeed of 97kt as it encountered the windshear, an insufficient margin of reserve above the stall speed given the conditions. As it entered the planned left turn, the bank exceeded the crew’s intended angle as the stall on the left wing worsened in relation to the right.

Photographs of the Ju 52 from an eyewitness, as it stalled, showed the aircraft 68° nose-down and banked almost 51° to the left at just 108m above ground – far too little for recovery. Video images, from an eyewitness on the Segnes Pass, recorded the final 0.4s before impact at 108kt, the aircraft almost vertically nose-down and still rolling left.

SUST indicates that, without the photographic, acoustic and video data, explaining the crash would have proven far more difficult.

“In the past, a lack of recorded data has often made it impossible to clarify accidents that occurred during commercial flight operations,” it says, pointing out that previous safety recommendations have urged installation of lightweight recording systems for all aircraft, regardless of age.

The aircraft involved in the accident was not required to be fitted with a flight-data recorder and, although a cockpit-voice recorder would have been necessary for commercial air transport, the Swiss federal aviation regulator had granted an exemption to operator Ju-Air and none was installed.

SUST states that technical options exist for historic commercial types. “An exception, such as the one granted for Ju-Air’s aircraft,” it says, “does not constitute a safety-conscious solution.”