Russian investigators probing an Airbus A321 hard landing have made the extraordinary accusation that its cockpit-voice recorder was erased and fitted in another aircraft, then re-installed in the damaged jet, ahead of the inquiry commission’s arrival.

The Nordwind A321 – on final approach to Antalya’s runway 36C on 10 January – sustained serious damage after the aircraft, which had slowed below its lowest selectable speed threshold moments before touchdown, was abruptly pitched down and struck the runway nose-gear first.

Its crew subsequently executed a go-around, with multiple system problems emerging, before landing on the same runway. None of the seven crew members, the only occupants, was injured. 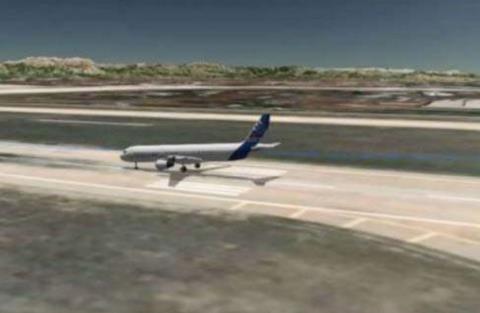 But in its preliminary factual findings from the accident the Interstate Aviation Committee says that the cockpit-voice recorder, while being analysed in Moscow, revealed only a few seconds of information.

It says this indicates the button to erase the cockpit-voice recorder “was pressed in the cockpit”.

Investigators used specialist techniques to retrieve just over 2h 4min of recordings, but found there was “no record” of the incident on 10 January.

But there was a record of a subsequent flight – the next day, 11 January – by a different Nordwind A321 flying the route from Antalya to Moscow Sheremetyevo.

There were also recordings of Russian maintenance personnel at Sheremetyevo carrying out maintenance on 11-12 January, and then discussions on 13 January including remarks about pushing the cockpit-voice recorder ‘erase’ button.

The Interstate Aviation Committee says it was informed of the accident on 14 January.

The inquiry believes that, in the aftermath of the accident to the A321 (VQ-BRS), both recorders were removed and taken to Antalya’s RMS Technic maintenance facility, and the voice recorder was fitted to a second A321 (VP-BHN) flying the return service to Moscow.

After this A321 arrived in Moscow, it was removed by another maintenance firm, NW Technic, and – in hand luggage on an Aeroflot flight – transported back to RMS Technic in Antalya where the recorder was refitted to the original damaged A321, before the inquiry team arrived.

“The [inquiry] believes the loss of information recorded [on the cockpit recorder] of VQ-BRS became possible as a result of non-compliance by officials of [the airline and maintenance companies],” it says, pointing out that pre-emptive retrieval of flight-recorder information is prohibited.

FlightGlobal has contacted Nordwind, NW Technic and RMS Technic for comment on the investigators’ findings.

The inquiry has recommended that Russian and Turkish regulators “evaluate the actions” of officials of the three companies regarding the loss of the cockpit-voice recording. 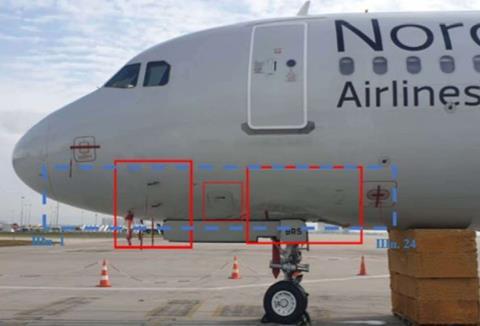 Substantial structural and aircraft systems damage resulted from the impact

Analysis of the accident sequence determined that the autopilot and autothrust were disengaged during the base leg and the aircraft was flown manually during the final approach.

But as it descended below 270ft – about 100ft above ground – its airspeed began to fall below the approach speed of 122kt. It further decayed to 115kt, below the lowest-selectable speed threshold of 117kt, while descending at 700ft/min.

At 20ft above the runway the airspeed reached its minimum of 109kt, with the aircraft pitched 5.5° nose-up, idle thrust was selected.

Then the captain abruptly moved the sidestick fully forward, holding it there for 1.5s, resulting in a sudden, sharp reduction in pitch at a rate of 9°/s.

Although the captain simultaneously applied full thrust, the aircraft had pitched nose-down by 3.9° and its nose-gear struck the runway with a 2.64g impact. It bounced and the captain pulled the sidestick, while sidestick input also registered from the first officer’s position.

Several systems immediately began to fail. The A321’s flight-control system switched to direct law, two inertial reference systems failed, and attitude indications disappeared from the captain’s instruments. Although the flaps were partially retracted during the go-around, the landing-gear could not be retracted – the crew claimed the lever jammed.

The first officer was given control of the aircraft, because the attitude indicators were still functioning on the right side, and trimmed it.

As the aircraft reached 920ft an avionics smoke alarm triggered and the crew declared an emergency. The third inertial reference system failed at 3,400ft, the attitude indicator on the first officer’s side disappeared, and the captain retook control.

The crew carried out a flypast for a visual inspection of the landing-gear before attempting another approach. As it passed over the runway the crew received alerts about two different hydraulic circuits. The inquiry says a total of 103 failure messages, concerning various systems, were received.

With the landing-gear confirmed in the deployed position, the crew completed the approach and landed on runway 36C where the A321 came to a halt.

In its analysis the Interstate Aviation Committee, which published its findings in April, made a number of recommendations about improved awareness of stable approach criteria, go-around procedures, and prevention of hard landings.