Irkut has carried out the maiden flight of the MC-21-310, the version of the twinjet powered by Russian-built Aviadvigatel PD-14 engines.

The flight – with aircraft number 73055 – took place from Irkutsk aviation plant’s airfield on 15 December and lasted about 1h 25min.

It was crewed by two test pilots and an engineer, and the flight involved initial powerplant checks as well as tests on the stability of the aircraft. 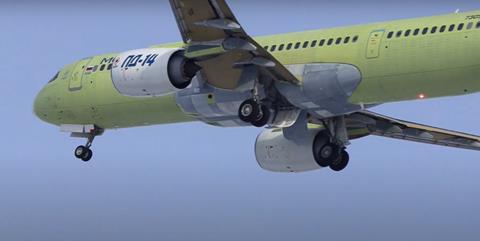 Powered by the Aviadvigatel PD-14, the MC-21-310 lifted off from Irkutsk on 15 December

The sortie follows Russian trade and industry minister Denis Manturov’s claims that the aircraft would fly by the end of this year.

“Today we see the result of a consistent state policy in the development of high-tech industries,” he says, adding that this has “created a new generation of designers and production workers”.

Manturov adds that the MC-21-310’s first flight is the “fruits of labour from tens of thousands of people” working in the engine-manufacturing facilities.

The MC-21 had previously only flown with the rival Pratt & Whitney PW1400G engine. This variant of the twinjet is desginated the -300.

Chemezov says the MC-21 will “returns our country to the top league of world aviation”.

“For the first time in many years, a new, entirely-Russian engine has appeared,” he says.

Aviadvigatel says the specific fuel consumption of the engine is 10-15% lower than that of previous-generation engines, owing to the use of innovative technology and materials.