Russia’s ministry of transport is tabling a legislative proposal to withdraw subsidies intended for the Ilyushin Il-96-400M programme and redirect them to support other areas of the domestic aircraft industry.

The draft legislation follows a meeting on the Russian air transport industry held in May and a presidential directive in June.

It proposes to redistribute federal funds amounting to Rb13.8 billion ($181 million), planned for the Il-96-400M this year.

Just over Rb12 billion of this figure will be put towards other aircraft programmes, adding to Rb4.9 billion in funding previously provided in a December 2019 declaration. The balance of Rb1.78 billion would compensate state lessor GTLK for lower lease rates offered to Sukhoi Superjet 100 operators. 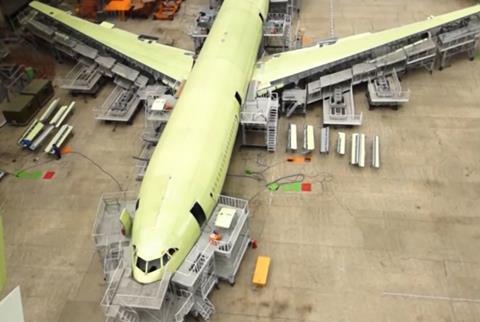 No operators have been signed to take the Il-96-400M

The transport ministry had put forward a suggestion, earlier this year, to allocate Rb7.2 billion to the Il-96-400M plus another Rb4.5 billion for domestic aircraft acquisition.

But the “current lack of a potential operator” for the Il-96-400M, says the draft legislation, presents a risk regarding the subsidy.

The aircraft is a stretched and modernised 386-seat version of the Il-96-300 and a single example is undergoing assembly at the VASO plant in Voronezh.

Documentation accompanying the legislative proposal details the proposed re-allocation of the Rb16.9 billion in funding, which would be put towards 56 aircraft.

This documentation puts the total funding required for the aircraft and helicopters at Rb31.35 billion, adding that a balance of Rb14.4 billion in extra-budgetary funding will be needed for the acquisitions over the period 2020-23.

It points out that the Il-114-300 and Mi-38 are new types which present additional costs during introduction to operators’ fleets. The proposed financing figures will enable these operators to be offered a “preferential rate” of leasing and support further sales.

Russia’s government has been trying to stimulate domestic aircraft production. Subsidy legislation for the Il-96-400M programme had stated that more than 95% of air transport in Russia was conducted by foreign-built types, and that the number of Russian-built aircraft was “constantly decreasing” – threatening to fall to just 73 by 2025.