Qatar Airways on board as IAG proposes €2.75bn capital increase

British Airways and Iberia parent IAG is proposing a €2.75 billion capital increase, to which Qatar Airways – its largest shareholder with 25% – has already agreed to sign up.

IAG says the increase would strengthen its balance sheet and liquidity, and reduce financial leverage, given that it does not expect global passenger demand to recover to pre-crisis levels until at least 2023.

The company is also taking the step to shore up its defences in case the scenario on which it is currently basing its capacity-planning deteriorates into a deeper rut.

Shareholders will meet on 8 September to vote on the capital increase.

“[The capital increase] will enable the group to emerge from the current pandemic in a strong position, with more resilience, greater flexibility and the ability to make the right operational and strategic decisions for the long-term benefit of all its stakeholders,” says IAG.

IAG states that it has responded to the pandemic with a “significant” reduction in operating costs – from €440 million per week in the first quarter to €205 million in the second – by reducing passenger capacity, cutting non-essential spending, and implementing salary reductions after union agreements.

It has also accessed government support enabling the furlough of personnel in the UK, Spain and Ireland.

IAG has halved its planned capital expenditure to around €7.3 billion for 2020-22. It has reduced aircraft deliveries by 68 aircraft to 75 over the period, and implemented a retirement of 53 long-haul aircraft by the end of 2020. The company also has the ability to return 42 leased aircraft in 2021 and another 54 in 2022.

The company has already lifted its liquidity through measures such as loans and extension of revolving credit facilities, and through the sale-and-leaseback of 10 aircraft.

As a result its liquidity at 30 June stood at €8.1 billion, including €6 billion in cash and over €2 billion in undrawn finance facilities.

But it says that enhancing the financial position is “vital” to ensuring sufficient liquidity, after it developed a “downside scenario” to examine the impact of a “more prolonged and severe” downturn in air travel compared with its current capacity-planning. 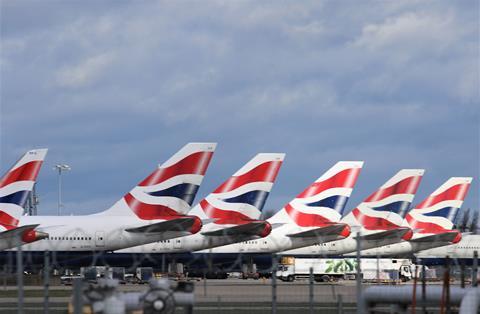 IAG is the parent company of carriers including British Airways

This downside scenario would reflect a 66% overall reduction in passenger capacity during 2020 compared with the current planning of 59%, plus a slower recovery in 2021. It also assumes reduced revenue from cargo and other activities.

Convergence of the current and downside scenarios would take place only by the second half of 2022.

The proposed capital increase, says IAG, would ensure it has enough liquidity to cope with the downside scenario.

“We are seeing early signs of passenger demand returning,” says IAG chief executive-elect Luis Gallego. “Now is the time for us to be bold again and ensure IAG emerges from this current crisis in a strong position.”

Net proceeds of the capital increase would not be used to fund the acquisition of Air Europa, IAG insists. But it states that it is discussing a “potential restructuring” of the Air Europa acquisition.

Qatar Airways holds 25.1% of IAG and has entered an “irrevocable undertaking” to vote in favour of the capital increase.

“Our investment in IAG has always been for the long term and we continue to support the company through these difficult times for our industry,” says Qatar Airways Group chief Akbar Al Baker.