Rolls-Royce has eliminated the backlog of Boeing 787s grounded while they await maintenance in relation to Trent 1000 blade-durability issues.

The powerplant manufacturer had expected to reduce the number of 787s awaiting work to single digits by the end of the second quarter of this year.

Rolls-Royce says the clearance of the backlog means it has “met and exceeded” its own commitment.

“It has been a difficult journey, and one we could never have undertaken without our customers’ patience and support,” it adds.

Three specific blade issues – which emerged in close succession – have affected Trent 1000s over the past four years. 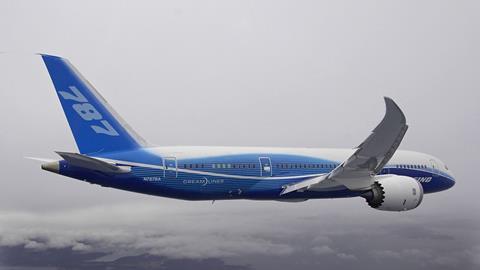 The initial problem centred on sulphidation corrosion on the intermediate-pressure turbine blades, spurring the manufacturer to develop a new blade with improved protective coating.

Rolls-Royce says the improved blade, for all package versions of the Trent 1000, has been installed in more than 99% of the operational fleet.

Resonance vibration originating from fan blades under certain conditions led to the cracking of intermediate-pressure compressor blades, and prompted the modification of the components, initially for Package C engines, with a similar subsequent redesign for the TEN version.

Rolls-Royce expects the compressor blade roll-over programme for these engine variants to be completed by the end of 2021, while a redesigned blade for the Package B engine will become available from the fourth quarter of this year.

This has been due to sub-optimal design of small holes in the blade, through which cool air is blown to protect the blade from high temperatures.

Rolls-Royce has developed enhanced blades for Package B and C high-pressure turbines, improving the efficiency of this ‘film cooling’ process, with over half the fleet since modified.

But a modification for blades on the TEN variant remains outstanding. The company says this modified design is undergoing endurance testing – which is over 75% complete – after a “rigorous root-cause investigation” and it expects incorporation into the fleet within the first half of 2021.

Rolls-Royce says the emergence of the three issues “at the same time” have made the matter “more challenging to resolve”, forcing the company to expand its servicing capacity to deal with dozens of aircraft parked to await blade changes.

Civil aerospace president Chris Cholerton says the elimination of this 787 backlog is an “important milestone” but that the company will remain focused on assisting customers with returning the twinjets to post-crisis service, and completing upgrade work across the fleet.

“We deeply appreciate the understanding and co-operation of our customers who have been impacted by this situation for a long time,” he says.

It has also introduced new processes in order to cope with the Trent 1000 issue, particularly as it has adapted to changes in working practice, and it says these measures will become part of its regular operations.

These include remote training of its airline customers’ engineers to use digital visualisation technology to carry out inspections of the engines, rather than sending inspectors to the carrier or receiving engineers at Rolls-Royce’s training facilities.

“The ability to continue performing these inspections allowed a number of our customers to avoid [aircraft-on-ground events] and is changing the way we support our customers,” says the company, adding that it is looking to expand this scheme to other powerplant inspection work.

“Learning and improvements that Rolls-Royce has discovered in addressing this issue will be incorporated right across its business, making it more agile and responsive for customers.”