Scotland’s government is to embark on a renewed effort to sell Glasgow’s Prestwick airport to a private investor, following the recent withdrawal of a potential buyer.

Prestwick had been managed by New Zealand firm Infratil until 2013 when it sold the airport, for a token price, to the Scottish government.

Cabinet secretary for transport Michael Matheson says the government is “formally putting the business back on the market”, through a notice in official European Union documentation.

“This allows interested parties to submit formal proposals, and may encourage new interest as well,” he adds.

“This is an incredibly challenging time for the aviation industry, but we remain confident Glasgow Prestwick airport has a role to play in Scotland’s aviation sector.”

Matheson had appeared before a rural economy and connectivity committee on 7 October, stating that “good progress” had been made towards selling the airport following interest from “credible investors”.

But the preferred bidder, he said, was “unable to meet the commitments” needed to maintain that status following the deterioration of the air transport sector over the last few months.

“Although that is disappointing, it is completely understandable,” Matheson told the committee. But he stated that discussions were under way with “more than one” interested party. 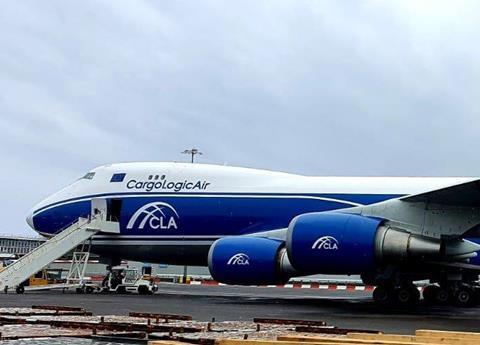 Freight operations are an important part of Prestwick’s business

He said that Prestwick’s operator turned in an underlying operating profit of £3 million ($3.9 million) for the year to 31 March 2020 – on a 46% rise in revenues to £36 million – just before the full impact of the pandemic emerged.

The committee signalled that the performance was largely linked to freight and fuel sales, while the passenger business was loss-making, and Matheson acknowledged that the airport’s figures this year would be affected by the air transport crisis.

He told the committee that loans made available to Prestwick amounted to £43.4 million, and defended the public investment by pointing out that the airport was a “significant employer” with 300 personnel at the site and over 1,000 jobs in the immediate aerospace cluster.

Matheson would not commit to whether the government would require repayment of the loan, when Labour party parliamentary member Colin Smyth asked for assurance that it would “not take a cut-price deal and write off those loans, simply to wash [its] hands of the airport”.

“I will not start to open up the approach that we will take to the sale of the airport if it proceeds,” said Matheson. “We will take an approach that is in the best interests of taxpayers in Scotland and the workforce of Prestwick airport, which is important to the Ayrshire economy. We will work to ensure that we get the best return for taxpayers if any sale proceeds.”

Matheson also insisted that the government would not sell the airport to the military, which uses the airport for refuelling stops.

He told the committee that the airport’s management team is looking to expand in niche markets, including freight, given the focus on air cargo over the course of the pandemic. There has also been interest in the potential for Prestwick to offer freight capacity to “bypass” potential disruption at seaports, he said, which might arise once the transition period for the UK’s leaving the European Union expires.