Third Libyan charged with Pan Am 747 bombing after 32 years

Precisely 32 years after a bomb explosion destroyed a Pan Am Boeing 747-100 over Scotland, the US government has formally charged a third person with the attack on the aircraft.

US attorney general William Barr states that the government has filed criminal charges against Abu Agela Masud Kheir Al-Marimi for his alleged role in the bombing of the aircraft, which had been en route for New York as flight PA103 on 21 December 1988.

None of the 259 occupants of the 747 (N739PA) survived the bombing, which also killed 11 people on the ground in the town of Lockerbie.

Two Libyan individuals – Abdelbaset Al-Megrahi and Lamin Khalifah Fhimah – were charged and tried at a special Scottish court in the Netherlands.

While Fhimah was acquitted, Al-Megrahi was convicted and imprisoned in 2001, ultimately being released on compassionate grounds before his eventual death in 2012. 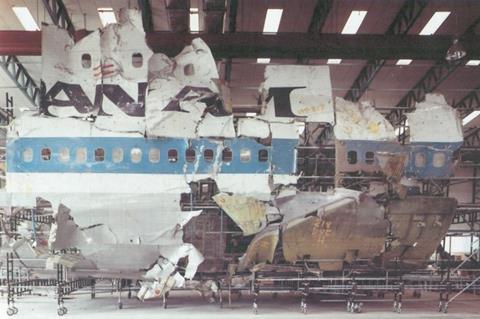 Speaking at a briefing on the 32nd anniversary of the bombing, Barr said the investigation “also pointed to a third conspirator”.

“But at the time investigators were unable to identify or locate this third person,” he says.

Barr says the “breakthrough” which led to the charges against Masud occurred when, in 2016, law enforcement officials learned that the alleged third conspirator had been arrested after the collapse in 2011 of the Libyan regime led by Muammar Gaddafi.

Based on these details, and other evidence, US prosecutors and counter-terrorism specialists unsealed a complaint today in the US district court for the District of Columbia, charging Masud with terrorism-related crimes for his alleged role in the bombing of the 747.

Barr says the criminal complaint affidavit accuses Masud of building the bomb, which had been hidden inside a cassette-radio player and placed among clothing in a suitcase, and working with Al-Megrahi and Fhimah to carry out the plot.

It alleges that the attack was ordered by the leadership of Libyan intelligence, and that Gaddafi had personally thanked Masud for the attack. Masud was also allegedly involved in the fatal April 1986 bombing of a Berlin nightclub, which resulted in the deaths of three people including two US military personnel.

Acting US attorney for the District of Columbia Michael Sherwin, also speaking at the briefing, reiterated much of the basic evidence which led to the original charges against Al-Megrahi and Fhimah – notably the discovery, among the wide debris field, of a fragment of a timing circuit, produced by a Swiss electronics company for the Libyan military.

But he adds that the criminal case includes travel records which “prove” Masud’s role in the conspiracy, stating that he flew from Tripoli to Malta on 14 December 1988, seven days before the attack, followed by Al-Megrahi and Fhimah on 20 December.

Sherwin says the conspirators worked to arm the explosives, and used clothing from a Maltese shop to conceal the cassette-radio. A merchant of the shop became a crucial, yet controversial, witness in the case.

The conspirators allegedly loaded the suitcase containing the clothing and the bomb onto a feeder flight in Malta, before it was transferred to a Boeing 727 in Frankfurt and then to the 747 at London Heathrow.

Sherwin says Masud boarded an aircraft with Al-Megrahi in Malta to fly back to Tripoli. He adds that the sum total of the evidence offers a “compelling” case against Masud.

Masud remains in Libyan custody but Barr says the US government will pursue “every feasible and appropriate means” to prosecute him, in co-ordination with Scottish counterparts, adding that he hopes the Libyan authorities will allow Masud to be tried in a US court.

“At long last this man, responsible for killing Americans and many others, will be subject to justice for his crimes,” states Barr.