Reaching for the stars

Space is a vast domain, defying human attempts at visualisation. If Earth were the size of a grape, the Moon would be a pea and about as far away as your arm is long; the Sun a beachball some 150m distant – call it twice the wingspan of an A380 – and the nearest star 40,000km away – farther, really, than any of us can sensibly imagine.

For a different perspective on scale and citing just a few examples, Airbus reaches all of those places. Watching the stars, the ESA’s Airbus-built Gaia spacecraft is currently parked 1.5 million km away in deep space, surveying in unprecedented detail 1 billion lights in our Milky Way galaxy. Launched in 2013, the celestial mapping mission has returned a trove of data on position and movement; it has even discovered uncharted asteroids orbiting the Sun. 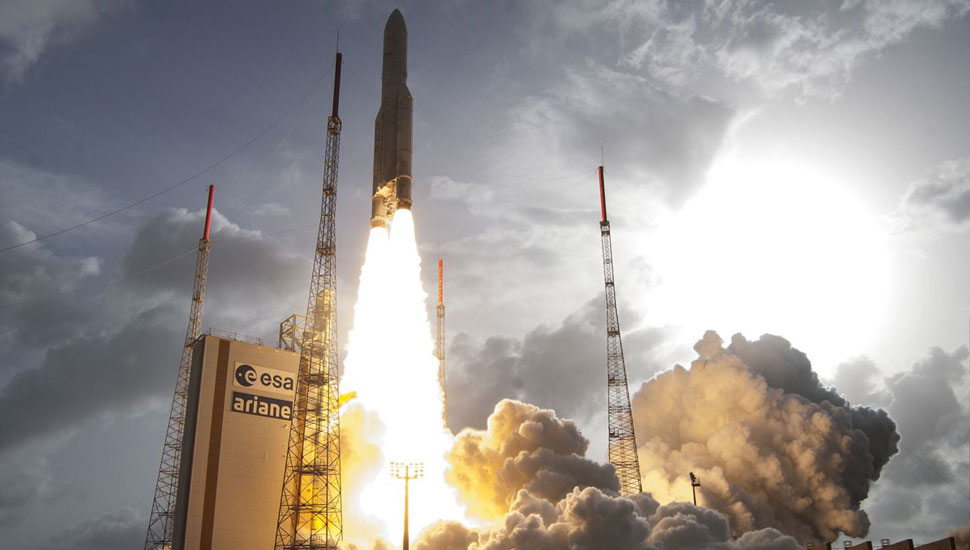 Ready for launch late this year, Cheops – the CHaracterising ExOPlanet Satellite – will from Earth orbit search for signs of planets orbiting many of those Milky Way stars. Next year will see the launch of the ESA’s Sun-observing Solar Orbiter, which will fly closer to our star than any previous spacecraft and return hard-to-obtain images of its polar regions.

Also scheduled to fly in 2020 is the second half of ESA’s ExoMars mission – to deliver an Airbus-built rover, equipped with an exotic biology laboratory and appropriately named Rosalind, after Rosalind Franklin, the British chemist whose work underpins our understanding of the structure of DNA.

Meanwhile, here at home ESA’s small galaxy of Earth-observing Sentinel missions are monitoring our land, sea and atmosphere; one is the Airbus-built Sentinel-5P, charting air pollution in graphic detail. The next time you make a long-distance phone call, chances are the signal travelled via an Airbus-built Eurostar satellite. New satnav receivers will be tuned to signals from Europe’s super-accurate Galileo satellites, packing atomic clock payloads built in the UK by Airbus subsidiary Surrey Satellite Technology.

Airbus has long been the prime contractor for Europe’s Ariane launchers and today, with rocket propulsion partner Safran, shares joint-venture responsibility for the programme – including development of its soon-to-fly and all-new Ariane 6 heavy lifter.

In space, then, Airbus is mostly a supplier of what Colin Paynter, who heads its Defence & Space division in the UK, calls “exquisite assets”. But the future of what is one of the world’s biggest space businesses may equally be based on services and the adaptation of exotic technologies such as artificial intelligence. Drawing an arc from the early space age to today, Paynter notes that what was once a purely government market is now also populated with commercial customers and private investors. And, he says, Airbus has adapted well to this transition and even helped enable the change.

Telecommunications is a good example. Airbus has delivered about 60 of its Eurostar-series satellites, the big units that dominate services from the highest, geostationary orbits. But critically, the company’s long-running investment in technology for commercial purposes – rather than to government specifications – has also helped usher in the new era of constellation-based services. Airbus is now ramping up mass production of 150kg (331lb) units for start-up telecoms services provider OneWeb, and will be making hundreds per year.

That sort of volume, says Paynter, was a dream that is becoming reality owing to the adaptation of technologies created for other industries and the broader digitalisation of the economy. A company like OneWeb, going for volume, has changed the market and “I’m very pleased that Airbus has been able to navigate that [transition],” he says.

Airbus, of course, is a European company – and Paynter believes its roots will remain firmly European – but it has also successfully aligned itself with the US space market, which represents around half of total world demand. The OneWeb satellites, for example are being built at a dedicated Airbus factory in Florida. Paynter anticipates opportunities to form partnerships in other regions by exploiting the Airbus strength in designing and building assets with its broader ability to advise and assist in the adaptation of new technologies and services.

Overall, he says, Airbus has a clear mission in space – which is to “add social value on Earth”. Planetary exploration comes under this umbrella, as do “protect-connect-inform” functions such as the OneWeb project. Airbus works with ESA and other partners in Earth observation – which is part of informing “in a rather unique way”. Protection covers support for the armed forces – with information, navigation, timing and communications.

That approach, says Paynter, transcends any single-sentence tagline or pithy mission statement. But, he says: “People here [at Airbus] warm to that.”