With the first A350 delivery milestone behind it, Airbus is steadily building production towards a rate of five aircraft a month by the end of next year.

But the manufacturer is under no illusions about the challenge it faces as it works towards its target rate of 10 aircraft a month by 2018.

Monthly A350 output is due to reach “rate three” in early 2015 and the production ramp-up is the next phase, says A350 programme manager Didier Evrard. 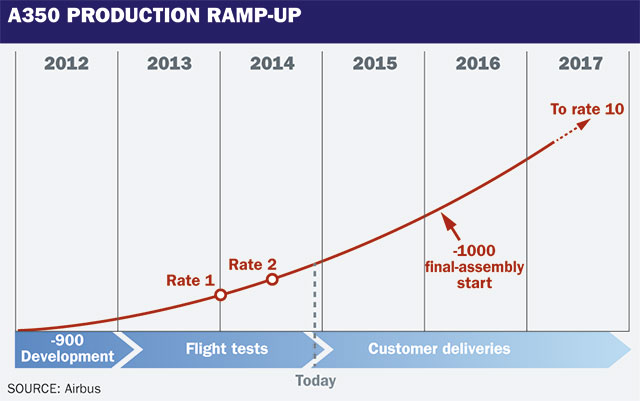 Airbus has 14 customer aircraft at various stages of completion on the Toulouse assembly line, says Evrard, who takes over as Airbus’s executive vice-president of programmes on 1 January 2015 following the promotion of Tom Williams to chief operating officer.

“For the ramp-up we are well prepared,” says Evrard, but he warns that Airbus “mustn’t under-estimate the journey” to reach its target of 10 a month.

“We need to go to rate 10 in four years. This rate was achieved on the ‘long-range’ [A330/A340 programme] so we know exactly what sort of status and quality you need to achieve,” Evrard says. “But on the long-range we did it in 18 years. Here we need to do it in four years, and this is the challenge we have.”

Evrard is confident Airbus can achieve its target because the A350’s design is already mature and stable. “We can build on that to accelerate. Then it’s about supply-chain performance. We’ve been working a lot with our suppliers over the last two or three years to make sure that they were ready to accelerate when the time would come.”

The other aspect of the ramp-up that must be managed is cabin customisation. This is where Airbus came unstuck with the A380, when the introduction of each new “head of version” for a new customer became a complex and lengthy process.

“We have a good grip on customisation,” says Evrard. “We have completely changed our way of customising aircraft. The A350 is much more friendly to customisation and this is a key success factor for the ramp-up."

Production is underway of components for the first A350-1000, and final assembly will begin in early 2016. The stretched variant is due have its maiden flight in the second half of 2016 with service-entry slated for mid-2017.