Airbus is evaluating a more conventional nose shape for the A350 XWB derived from that of the A380 as it continues to refine the twinjet’s design, Flight International magazine exclusively reveals in its 8 May issue. 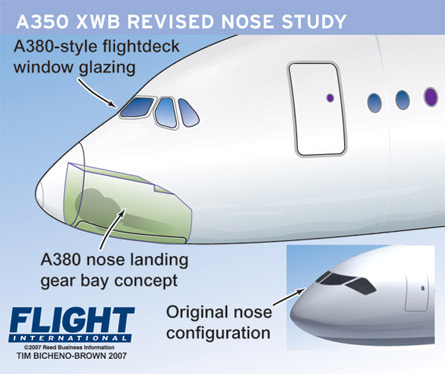 Airbus says the A350’s new nose shape is “one of several design studies” it is working on, but has not yet frozen the design. It has adopted the A380-derived nosewheel-bay configuration, which puts the landing gear much further forward than previous Airbus widebodies, in the space directly under the cockpit.

“There have been a number of trade-offs in the nose area, enabling us to maximise the volume of the cockpit and avionics bay while optimising aerodynamics and the positioning of the nose landing gear,” says Didier Evrard, executive vice-president A350 programme.

This configuration required Airbus to relocate the flightcrew rest area in the fuselage crown rather than below the cockpit as proposed on the previous A350 design.

A computer-aided design drawing graphic released by Airbus of one of the A350 nose configurations under study reveals that it now has a more conventionally shaped nose and flightdeck window layout compared with the one shown in all A350 XWB images released to date. Rather than the angular, four-window design, the study has a six-window configuration bearing a family resemblance to the A380’s cockpit glazing.

The manufacturer is refining the XWB’s aerodynamics using computational fluid dynamics (CFD) and windtunnel testing, says A350 chief engineer Gordon McConnell: “With the CFD design tools and the computing power now available we can iterate the design much faster, and we have been able to reduce the windtunnel time by 40% compared to the A380.”