Airbus to target near doubling of A400M deliveries in 2016

The delivery of only 11 A400M transports by Airbus Defence & Space in 2015 has prompted group chief executive Tom Enders to vow a target of “20-plus” deliveries in 2016.

By Enders’ admission, the programme faced a challenging year, with the type being grounded after the crash of an aircraft destined for Turkey. Additionally, customers are calling for a schedule and capability assessment on orders made, leading to a slower output than planned. The original target for 2015 was approximately 13 aircraft.

“We delivered 11 A400M in 2015, and we cannot be satisfied with that level of delivery – we planned for more,” Enders told a press conference in London on 24 February. “We still have some problems [with] that programme.

“I expect, in terms of deliveries to customers in 2016, there will be a ‘two’ in front, so that means 20-plus deliveries of A400M in 2016. This is of course all subject to discussions with the various customers.”

Enders claims stable revenues in the defence and space division of the business are encouraging, and the team behind the transport is doing a “great job” on trying to align the programme and aircraft with customer needs regarding deliveries and upgrades.

“The challenges that remain are on the upgrade of the military capabilities of that aircraft going forward,” he adds.

Enders says it would be “futile” to comment on any penalties the issues with the programme has faced, but “obviously we work hard to avoid additional charges, that is a given”.

He notes Airbus is looking into cost reductions and improvements in processes, “but this is a programme that is still troubled in various ways, we’ve made that clear and there is no reason to deny this," he says, adding: "the A400M is making progress and the final assembly line is definitely going to deliver more in 2016 – we have to because we are behind customer expectations, and all in all, it is certainly an achievable goal to deliver to our customers, throughout 2016, more than 20 aircraft."

The 11 tactical transports delivered in 2015 did not include four Royal Air Force aircraft that were awaiting the full integration of their defensive aids suites. Two of these have since been delivered, which will contribute to the total and Enders' target number in 2016. 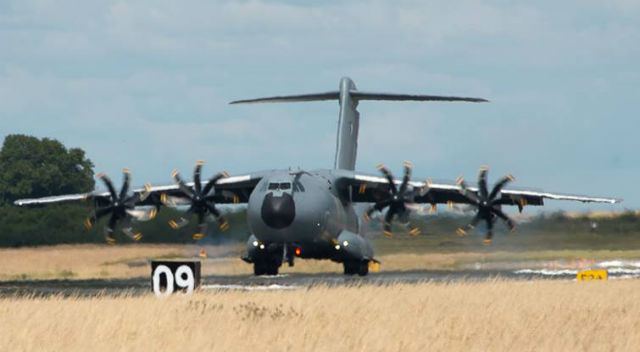 Elsewhere, 14 orders for the A330 multirole tanker transport bolstered business in 2015, comprising eight for France, four for South Korea and two refurbished examples for Australia.

Airbus has also touted the possibility of acquiring more shares in missile manufacturer MBDA, if other shareholders were to offer them up, responding to speculation Italian company Finmeccanica could look to sell its holding.

With €11 billion ($12 billion) of the total €64 billion in business last year coming from defence sales, Enders is confident the company has a strong offering to this market.

“We see rising business opportunities to capture higher defence budget spending, and our efforts to increase the competitiveness of Defence & Space are now paying off,” he says.