Airbus will in June begin assembly of the first structure under its Wing of Tomorrow technology demonstrator programme, aimed at developing a composite wing manufacturing concept for a next-generation single-aisle aircraft. The 5m (16ft) part is an initial test article ahead of the planned assembly in 2020 of three full-scale demonstrators at a newly built research centre next to Airbus’s UK wing factory in Broughton, Flintshire.

Although Airbus has not yet launched a replacement for its A320 family, the manufacturer appears keen to employ a carbonfibre wing on any future single-aisle aircraft. Sue Partridge, head of the Wing of Tomorrow programme, told FlightGlobal in April that the goal is for the primary wing structure to be made from carbonfibre, while individual components may be manufactured from advanced metallic or thermoplastic composite materials.

Switching to a carbonfibre structure on new-generation aircraft – such as the A350 or Boeing 787 – has enabled airframers to improve aerodynamic efficiency by building longer, slimmer wings without the weight penalty from a traditional metal design. 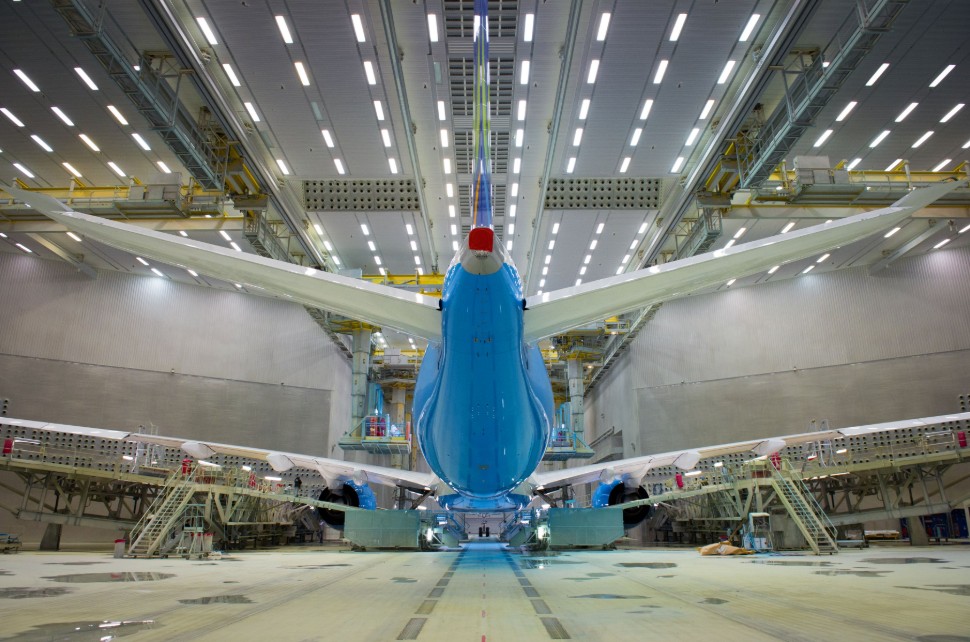 Airbus has used carbonfibre empennages and other composite components on its aircraft for decades – as has Boeing – and has been able to increase production of those parts as aircraft output has grown, especially in the single-aisle segment. The European airframer intends to raise monthly output of A320-family aircraft to 60 units this year, and has studied potential increases beyond 70.

Partridge’s brief is to develop a production approach that will reduce the manufacturing cost for a composite single-aisle wing to match that of the metal wing on today's A321. Additionally, the system will need to support output of 60 aircraft per month within two years of a programme launch – “the critical bit of the target”, she notes – and be capable of reaching rate 100 at a later stage.

The project concentrates on three main areas: component manufacturing process improvements, developing new assembly approaches with greater automation, and integrating the wing and its internal systems in what Partridge terms a “more modular” way than today.

An overall target is to reduce process steps, manual labour and part count. Structures traditionally assembled from individual metal parts will be built as integrated units in order to simplify wing assembly and reduce usage of fasteners. Inside the wing, Airbus intends to reduce system complexity and to integrate, as much as possible, equipment before final wing assembly. Under the future design, it will not be necessary for production staff to climb into fuel tanks during wing integration, Partridge says.

The first of the three full-scale demonstrators due to be assembled in 2020 will be used for structural tests to validate new composite manufacturing techniques. The programme participants are exploring multiple approaches to increase productivity of carbonfibre processes, including dry-fibre deposition with later resin infusion and out-of-autoclave curing.

The second demonstrator will be a fully integrated wing to validate the system integration approach, while the third is to be manufactured at production-rate conditions in order to “really understand the rate capabilities of the technologies we have chosen”, Partridge says.

Airbus has determined the shape and architecture of the demonstrator wing and the project has passed the critical design review stage. Now, the team is in the process of manufacturing tooling and preparing the production of the demonstrators. Airbus is targeting early 2022 for completion of the Wing of Tomorrow programme.

“The objective of the programme is to get the business ready for the launch of a next-generation single-aisle-type product,” says Partridge. Acknowledging the A320 family’s existential importance for Airbus, she says: “Managing the transition from the A320 family to a new single-aisle product will be critical to the business… We have to get it right. We have to ramp up very quickly, and in order to do that we need to ensure technologies that meet our cycle time and cost targets.” 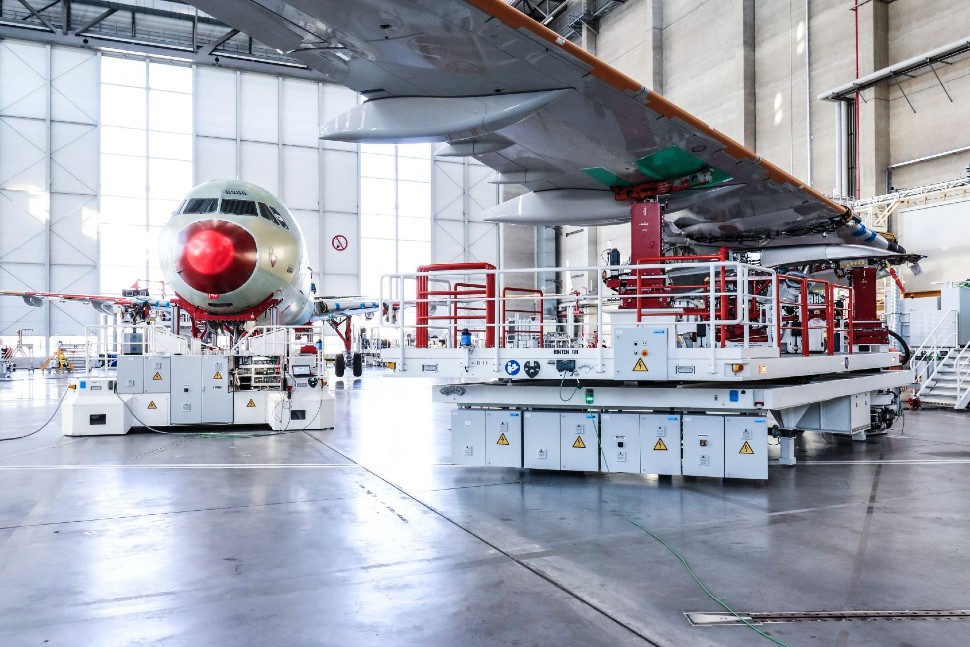 Russ Dunn, chief technology officer and head of strategy at UK aerostructures specialist GKN Aerospace, says that providing mature processes and minimising production risks are central to the project. GKN manufactures the carbonfibre wing spar for the A400M military airlifter, and rear spar and trailing edge assembly for the A350. The supplier is targeting a similar work package on any future single-aisle programme, and is a partner in the Wing of Tomorrow effort alongside other suppliers and research institutes

Dunn says that in the past, suppliers made bids for work packages and then developed the required technologies. “Today that approach won’t work. The customer needs to be really confident that you have control of the process. This is the reason why big technology programmes are so important,” he says.

Simulation has become a central tool to develop and, crucially, further explore manufacturing techniques to make improvements. Dunn says that detailed simulation has enabled manufacturers to “really understand the opportunities in the process”. While carbonfibre has been used in aerospace for decades, during most of that time, manufacturing processes were developed through physical exploration – learning by doing.

It is only in recent years that simulation capability has developed sufficiently to represent in detail how composites behave during manufacturing, and what effect that has on a finished component’s properties.

In Dunn’s view, existing composite know-how is still “relatively immature”, with ample room for improvement – and simulation is a means of unlocking that potential. “You need to understand deposition, resin flow, temperature – there are a lot of variables in the process that you need to be able to simulate in order to both optimise your [component] design and manufacturing process,” he says.

So, what happens when the Wing of Tomorrow programme has been completed? Dunn says that from GKN’s point of view it would be “ideal” if Airbus were to launch a new single-aisle programme over the next two years.

Although required technologies are not ready yet, he is confident that GKN will be in a good place towards the end of the effort to bid on a new aircraft programme. “If that decision was pushed five or 10 years down the line, clearly we need to look at what further opportunities we will have to refine or improve the technology,” he says.

Airbus has previously said that it does not foresee the arrival of a clean-sheet single-aisle aircraft before 2030. Prior to the A320neo’s launch in 2010, the airframer had suggested 2025 as a potential service-entry target. But the re-engining programme that gave rise to the neo has pushed the next generation back. At the time the re-engine effort was launched Airbus indicated that propulsion technology had not advanced sufficiently to warrant development of an all-new aircraft.

A typical eight-year span for development of a clean-sheet aircraft for a service-entry around 2030 would place a potential launch near the end of Wing of Tomorrow’s scheduled duration. Dunn thinks that increased environmental pressure could be a catalyst to accelerate a new product launch, rather than to delay it further: “Sustainability in aviation will become a stronger theme… and there will be more pressure to bear on all of us involved in the aviation industry to do what we can to provide more efficient light products,” he says.

He notes that as even relatively small weight savings can generate substantial fuel efficiencies over an aircraft’s lifecycle, it is in the interest of manufacturers to make improvements that might previously have been considered too much effort.

Then there is the question of Brexit and potential consequences for Airbus’s wing production in the UK. The Wing of Tomorrow programme is based in the UK as all of Airbus’s commercial aircraft wings are assembled in Broughton; engineering and manufacturing activities and A400M wing assembly are located in Bristol. Partridge stresses, however, that the Wing of Tomorrow programme is a “transnational” effort, with activities and partners in France, Germany, Spain and other countries.

She notes: “The knowledge of wings, both from an engineering and industrial point of view, here in the UK is extremely relevant to the programme - that’s why the programme is being led by the team in the UK.” Airbus has declined, however, to discuss potential consequences for its UK activities after Brexit, now scheduled for 31 October. The airframer merely states that it is looking forward to “further clarity and the removal of uncertainty as soon as possible” so that it can “properly plan for the future”. The company adds: “We continue to plan for ‘no deal’ as that is the only way any responsible business can plan.” Measures include parts stockpiling, co-ordination with suppliers, and preparations for potential customs and regulatory changes in order to mitigate risks “where possible”, Airbus says.

But the manufacturer has repeatedly voiced its opposition to Brexit and warned that it would consider its UK presence if the country were to exit from the EU in a disorderly manner. In January, former Airbus chief executive Tom Enders – he retired in April and was replaced by Guillaume Faury – condemned the uncertainty over the UK’s arrangements as a “disgrace” and stated that the airframer is “not dependent on the UK”.

Enders praised the UK for having been “at the forefront of global aviation for over a century”, but argued – in view of the then-planned departure from the EU on 29 March – that the country’s aerospace industry was on a “precipice” which is “threatening to destroy” the sector’s legacy. “If there is a no-deal Brexit, we at Airbus will have to make potentially very harmful decisions for the UK.

“Make no mistake – there are plenty of countries out there who would love to build the wings for Airbus aircraft.”

Dunn acknowledges that the UK government has “strongly supported” GKN’s technology activities and that the company’s proximity to Airbus’s UK operations creates benefits. “We very much want to see that continue,” he says. But he points out that GKN receives similar support for technology activities at its facilities in the Netherlands and Sweden. “Our aim would clearly be to be globally competitive in all technologies we do,” he adds.

GKN Aerospace chief executive Hans Buthker said at a briefing in April that technology development is central to securing supply contracts on new aircraft programmes. He asserts, however, that in order to attract new business, GKN additionally needs to be able to establish operations close to the customer. “Proximity is important,” he says. Noting investment to establish facilities in Asia – in addition to GKN’s footprint across Europe and in North America – he says: “We are able to play the game on a global scale… We like to follow our customers.” 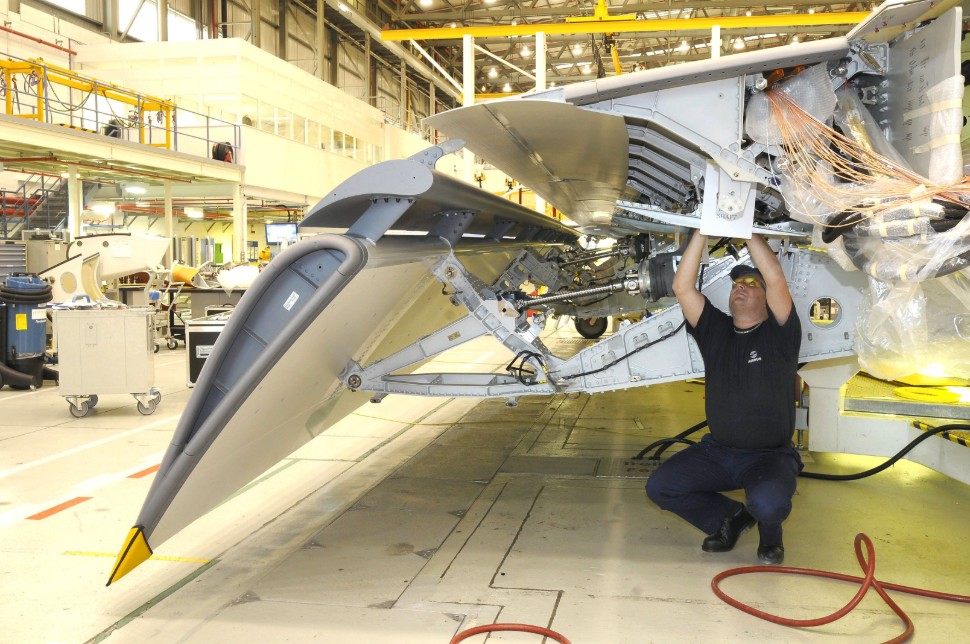