Max effect drags down overall sales and deliveries in 2019

Overall, net orders at Airbus and Boeing declined by 50% on 2018’s total, to 822 aircraft while total deliveries fell by more than a fifth to 1,243 units. With Max activity effectively in limbo for the last nine months of 2019, Boeing’s total net orders across all its products declined by more than 90% to 54 units while deliveries were halved to 380 aircraft. For reference, the manufacturer’s guidance a year ago was to deliver 895-905 aircraft in 2019. 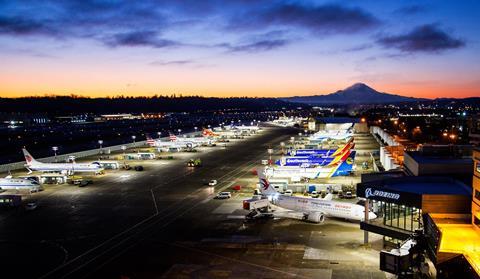 Max deliveries were suspended shortly after the Ethiopian Airlines accident on 10 March, and the grounding and ongoing crisis has blunted the airframer’s sales activities of the new 737 family. The Max net-order tally was significantly in the red, to the tune of 73 aircraft, as a result of cancellations.

Airbus enjoyed a slight rise in net orders last year, to 768 aircraft from 747 in 2018. It also powered to a new industry production record – taking the honours from long-time holder Boeing, with a total of 863 deliveries. The previous record of 806 deliveries was set by Boeing in 2018. The US manufacturer dropped behind Airbus in delivery terms for the first time since 2011.

Toulouse enjoyed a slight increase across its A320 family in deliveries, rising to a new record of 642 aircraft. Airbus had improved sales across the A320 family – net orders rose by over 100 aircraft compared with 2018. The success was powered by the largest variant, the A321neo which added the new XLR variant during the year, with 476 net orders in total.

Despite its woes in the narrowbody sector, Boeing still has bragging rights in the widebody category. Seattle delivered 60% of the widebodies in 2019 and secured over two-thirds of the net orders. Its performance was aided by strong sales of the 787 and 767 freighter.

While Airbus widebody shipments continue to be shaded by its US rival, it can boast having the best-selling aircraft in the twin-aisle category last year with the A330neo, which took 99 net orders. However, Toulouse’s sales performance in the sector was contaminated by the decision to end the A380 programme, which resulted in 70 cancellations and dragged its widebody net-order total down to just 51 aircraft.

The overall backlog declined by 400 aircraft during the year, to just over 13,100 units. Airbus remains the market leader, having slightly increased its share of the backlog to 57% since the end of 2018.