Boeing partially unveiled a New Midsize Airplane (NMA) concept with a 787-like composite wing and fuselage, a likely narrower wingspan than the Dreamliner and, for the first time, what the company calls a "hybrid cross-section".

After achieving an authority-to-offer decision earlier this year, Boeing is still perhaps months or a year away from a launch decision for an aircraft sized to carry 200-270 passengers and fly 5,000nm. 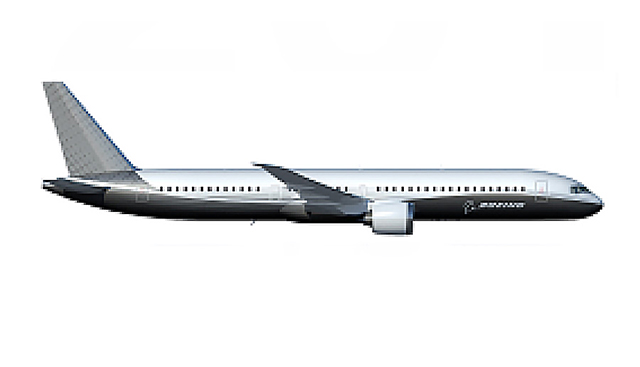 But more details of the concept have been released at the Paris air show, as the early configuration of the NMA takes shape within Boeing, which is in discussions with a host of potential suppliers, including engine companies.

The NMA will use composites "extensively" in the wings and fuselage, says Mike Delaney, Boeing's vice-president and general manager of aircraft development. 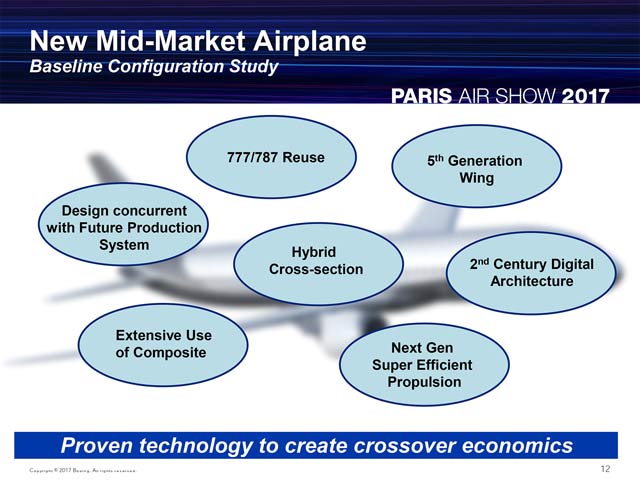 Structural materials could include advanced applications, among them out-of-autoclave thermoset composites and thermoplastic composites.

Another challenge will be identifying engine suppliers. Boeing is in discussions with GE Aviation, Pratt & Whitney and Rolls-Royce to define the NMA's clean-sheet propulsion system, which has been described as 40,000-50,000lb-thrust.

The new aircraft invites the opportunity to push the boundaries of technology, including bypass ratio. Asked in an interview if bypass ratios significantly above the current standard of 10:1 were possible for the NMA, Delaney confirmed they were.

That suggests a requirement for a power gearbox to decouple the rotation speeds of the low-pressure turbine and the fan blades, to prevent the latter from spinning above Mach 1.0. Without elaborating, Delaney says the engine companies have more options than using a power gearbox. 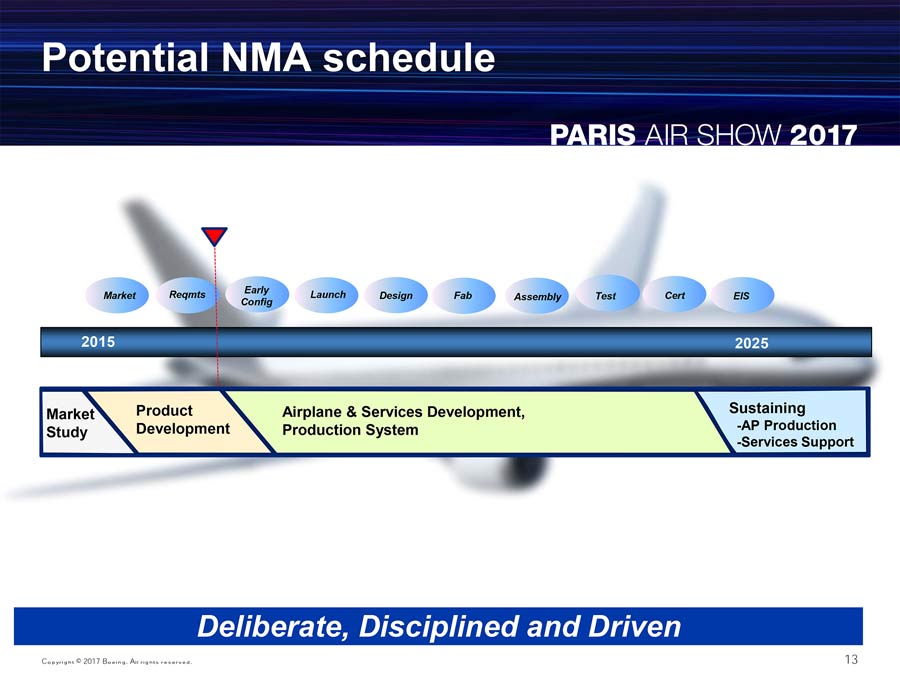 "We don't tell the engine guys how to design their architecture," Delaney says.

Perhaps the most intriguing design aspect of the NMA is the fuselage geometry. Boeing's early design studies have focused on optimising the cross-section to accommodate passengers, at the expense of creating space below-deck to carry bulk cargo pallets or containers.

The result is a hybrid cross-section for the fuselage, blending the passenger comfort of a twin-aisle on the main deck and the cargo compartment of a single-aisle below deck.

"It is a geometry that enables single aisle economics and twin-aisle comfort," says Delaney.

Using such a configuration, Boeing thinks the NMA will drive a new paradigm for operating economics in aircraft sized to fly 3,000-5,000nm. Delaney points to the precedent set by the 787. Boeing designed that aircraft to match the seat-mile cost of the 777 at significantly lower trip-cost.

"We want to do the same thing now into the market below the '87," Delaney says.