Airbus chief executive Tom Enders has expressed confidence in the A380 programme's future and hinted at further sales for the double-deck type.

Speaking at a delivery ceremony for Emirates' 100th A380 in Hamburg today, Enders said: "I am convinced we will still produce A380s 10 years from now."

He sees "huge" potential for further development of the aircraft. Noting the airframer's A380plus concept study – which was revealed at this year's Paris air show, and spans measures to increase seat capacity as well as aerodynamic improvements including installation of winglets – Enders says Airbus is making efforts "to keep the aircraft competitive for 2030 and beyond".

He adds: "We certainly work hard to please customers – not just Emirates, but other customers [too]... We like to think there is much more to come on this great aircraft." 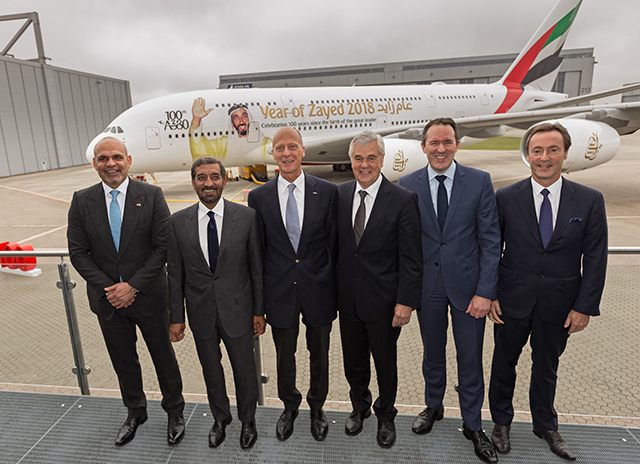 Enders believes "many more" A380s can be sold. Referring to outgoing Airbus chief operating officer for customers John Leahy, he says: "I am not sure I'll let John retire without at least one more significant A380 order."

Emirates Group chief executive Sheikh Ahmed bin Saaed Al Maktoum confirms that the airline has had talks about ordering further aircraft and is "very interested" in the A380plus.

The airline's president Tim Clark previously suggested that the possibility of further orders hinged on Airbus's capability to maintain a certain production volume and its securing of new orders from other operators too.

Dubai-based Emirates has ordered a total of 142 A380s.

Enders foresees "many more deliveries and milestones with Emirates". He says: "I firmly believe the Emirates A380 story is not just the beginning, but has a huge future."

He acknowledges that the Middle East represents a "very strong" region in terms of A380 orders to date, but notes a "strong base" for growth of the fleet in Southeast Asia and that Chinese carriers represent "additional potential".

Despite having received no orders for passenger A380s from North American airlines since the type entered service a decade ago – and with Delta Air Lines and United Airlines phasing out their Boeing 747s – Enders insists there could still be opportunities to sell the aircraft in that region.

In Ender's view, "there is hardly any airline with a leadership as courageous as Emirates'". He argues: "We are lacking people with the [Gulf carrier's] vision and strength and courage in the industry."