Airlines are beginning to push for discounts on current generation Boeing 777s, as the airframer looks to bridge a gap in deliveries until the 777X enters service at the end of the decade.

“I think it is common knowledge that aircraft tend to be sold to large and good customers with substantial discounts,” says Christoph Franz, chief executive of the Lufthansa Group, on a potential 777 discount during a media event in New York on 30 January. “So, the question of if there is additional discount to the existing discount, that is an interesting question. Hopefully, we would be able to achieve this discount.” 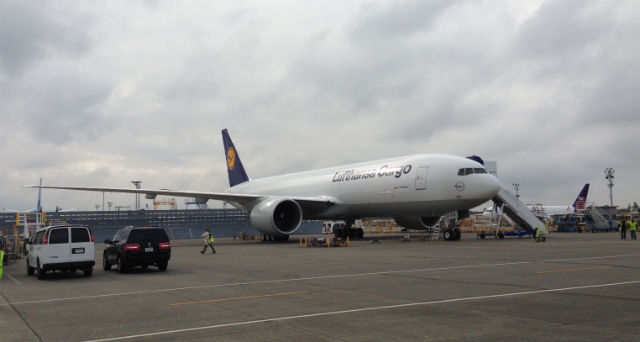 The group’s freight arm Lufthansa Cargo operates two 777 freighters with three more on order. However, it has not selected a replacement for the 13 Boeing MD-11s that will remain in its fleet after the last 777 delivery in 2015.

“There are at least 13 MD-11 freighters waiting for roll over,” says Franz. “For us, this gives a perspective that there will be demand in the future for further freighter aircraft and the 777, as we have already five on our orderbook, is a nice aircraft and hopefully we would be one of the customers.”

This is where further discounts could come in.

The Chicago-based airframer faces a steep drop in 777 deliveries after 2016. Deliveries will fall to just six in 2018 from 56 in 2016, Flightglobal’s Ascend Online database shows. They pick up again with the entry-into-service of the 777-9X in 2020.

Boeing acknowledges a need to fill this gap.

“We anticipate being able to build that bridge over the next number of years as we approach 2020,” said Jim McNerney, chairman and chief executive of Boeing, during an earnings call on 29 January. “We are working with [customers] on combined orders for the current 777 as well as the new one. And we anticipate at least the same kind of result that we had with the [7]37.”

The first 737 Max delivery is scheduled for the second quarter of 2017.

Boeing’s cost control initiatives are critical to any 777 discounts. These include the partnership for success programme where the airframer is forging long-term partnerships with certain suppliers in order to reduce costs in the near term, and its new contract with the International Association of Machinists and Aerospace Workers (IAM) for work on the widebody.

McNerney implied in his recent comments that these initiatives will likely help Boeing maintain its profit margins on the current generation 777 during the bridge.

“Now the partnering for success will be hitting it's mid-stride right around the time that the [777] bridge is being implemented and that’s not by accident,” he said.

In addition to discounts, Boeing could reduce the production rate of the 777 from 8.3 per month – about 100 aircraft per year – to help counter the gap in deliveries.

Lufthansa Cargo became the first operator of the type in the group, when it took delivery of its first 777 freighter in November 2013.

Entry-into-service was uneventful, says Franz. “The best news of it – I didn’t get any complaints,” he says.