Lebanese flag-carrier Middle East Airlines has taken delivery of the first Airbus A320-family aircraft to have been assigned a five-digit serial number, with the handover of an A321neo bearing MSN10000.

While the aircraft is not the 10,000th A320 to be transferred to a customer – that milestone is still a few months away – the delivery on 9 October marks the culmination of a behind-the-scenes project born of the ubiquitous twinjet’s success.

“We didn’t realise it would be the most successful commercial programme ever,” Airbus executive vice-president for programmes Philippe Mhun tells FlightGlobal, pointing out that original projections foresaw sales of 600 aircraft.

When Airbus switched to producing the re-engined A320neo family it opted against resetting the MSN counter, because it wanted to avoid confusion between older and newer models with identical serial numbers. Airbus’s then-head of the A320 programme Klaus Roewe said, at the time, that the manufacturer would simply take the numbering system to five digits.

But the airframer had never envisioned, in the late 1980s, that the production IT systems for its new single-aisle jet would ever need to cope with figures above four digits – a situation reminiscent of the ‘Year 2000’ issue which prompted a global update of older computer systems originally designed only to handle the last two digits of years.

Consistency of serial numbering across the supply chain is essential. FlightGlobal understands that over 600 systems have been modified, and that Airbus has been able to deliver A320-family aircraft with five-digit-compliant MSNs since last year.

The airframer has updated engineering, maintenance and flight operations manuals and software to meet the new MSN format, and has supported A320-family customers to ensure that their systems are all compatible with the technical updates.

Airbus has chosen to switch to the five-digit MSNs far ahead of the numerical sequencing, which had reached about MSN9600. Some spare MSNs have been allocated as test numbers for the pilot phase of the five-digit project in order to prepare both Airbus and its suppliers for the switch. 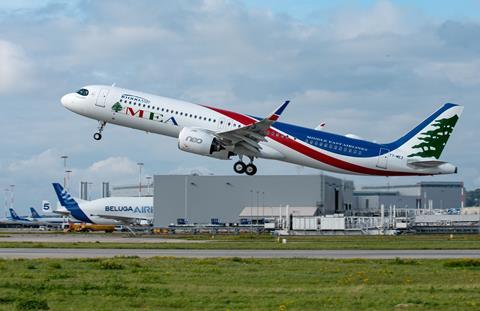 Delivery of MSN10000 ceremonially marks the change. The aircraft has been flying from Airbus’s Hamburg Finkenwerder facility since 11 September, under the test registration D-AYAA but is set to carry the San Marino registration T7-ME3.

Its fuselage is configured with the Airbus Cabin Flex layout, featuring overwing exits, and the twinjet – fitted with 160 seats including 28 in the business cabin – is powered by Pratt & Whitney PW1100G engines.

Mhun says MEA is a “historical partner”, having received MSN5000 in January 2012. MSN5000 is an A320 with International Aero Engines V2500 powerplants, and remains in service with the airline as OD-MRL.

MEA had ordered 10 A320neo-family jets in 2012, subsequently increasing this order to 11, and converting all of them to the A321neo. The airline added four more A321neos last year.

It was originally supposed to introduce five A321neos in 2020 but signalled last year – before the current air transport crisis – that it would advance the schedule and take nine. The airline received two, both in July, before the delivery of MSN10000.

Airbus took 24 years to reach MSN5000 but only another eight to reach the new five-digit landmark.

Mhun attributes the growth of the A320 not only to the inexorable rise in air transport but the differing business models which have developed and taken advantage of the type – such as low-cost carriers and, increasingly, long-haul operators.

He highlights the “wide range” of configurations, from high-density layouts “optimising the room being used” to those supporting widebody-style service including lie-flat beds. “This was something which was also key,” he says.

MEA revealed last year that four of its 15 A321neos would be the longest-range variant, the A321XLR, which is scheduled to enter service in 2023. The A321XLR was unveiled at the Paris air show, an aircraft which will improve on the capability of the A321LR through a specially-designed fuel tank.

Mhun cites this as an example of how the A320 family has been continually refined and enhanced over its 32-year service life, with demand driving output up from 58 aircraft a year for 1989 and 1990 to a similar number per month three decades later.

“The combination of demand and efficiency of the product drove these incredible numbers,” he says.

“We do our homework,” he adds, underlining the importance of “eco-responsibility”. The aircraft has increased its fuel efficiency, the A320neo family halving noise and improving fuel-burn by 20-30% compared with the previous generation.

Mhun is the son of one of the first A320 captains, from 1988 when initial deliveries took place, and he says pilots would discuss “how fascinating the technology was” with “no clue it would be so successful”.

The A320 pioneered digital fly-by-wire and side-stick flight controls, which have increasingly been adopted by other aircraft types.

“All along the life of product, we’ve kept commonality of parts huge,” Mhun says, adding that customers have benefited from lower operating costs through Airbus’s having the same type rating across the family and minimal conversion from the earlier A320s to the A320neo.

Speaking during the delivery of MSN10000 in Toulouse, MEA director general Mohamad El-Hout said the introduction of the aircraft, with its “distinctive” serial number, coincided with the airline’s 75th anniversary.

“Unfortunately, due to the current situation in Lebanon, this time we will not be able to celebrate the delivery of MSN10000 in Beirut, as we did with MSN5000,” he says.

“But I am sure that in these challenging circumstances, it is a ray of light, hope and motivation to surpass our nation’s difficulties.”