Airbus and Qatar Airways should encourage regulator to rethink A350 position: judge

Airbus and Qatar Airways should co-operate to persuade the Qatari civil aviation authority to adopt a different position regarding the grounding of the airline’s A350s, the judge overseeing the two sides’ legal dispute has stated.

In a detailed ruling which followed the latest High Court session on 26 May, the judge pointed out that the difference of opinion between the Qatari authority and the European Union Aviation Safety Agency, over the A350’s airworthiness, is a “most unfortunate situation”.

He said persuading the Qatari regulator that there are no airworthiness concerns – as Airbus contends it can demonstrate – must be in the airframer’s interests, as well as the interests of the airline, because Qatar Airways claims it wants the grounded A350s flying again.

Airbus had not intervened directly with the Qatari civil aviation authority, because the grounding was a domestic regulatory issue, and Qatar Airways had not invited Airbus to join the carrier in dealing with the authority, the judge said.

Neither of these approaches was sensible, he added.

“Whatever else happens in this case, I now expect Qatar and Airbus to work pro-actively together to try and satisfy the [Qatari civil aviation authority] that its current approach is wrong,” he ruled.

If the regulator is prepared to change its viewpoint, the aircraft might no longer be considered to present an airworthiness concern and this, in turn, could hurt the airline’s legal position – but the judge said this was “irrelevant”.

“It seems to me to be at least highly arguable that, if [Qatar Airways] does not work with Airbus in seeking to change the [civil aviation authority’s] mind, it would be failing reasonably to mitigate its losses,” he stated.

Airbus must be a “willing partner”, he added, in order to enable such mitigation. 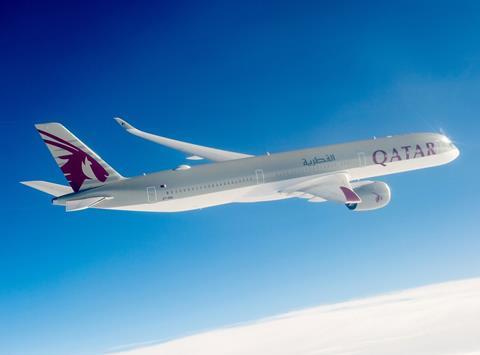 Qatar Airways continues to insist that a full root-cause analysis needs to be conducted to establish whether an airworthiness and safety issue exists, and that Airbus has not carried out such an assessment.

But Airbus denies this, maintaining that it has provided a series of documents which amount to a root-cause analysis.

While Airbus favours “engagement and an amicable solution”, rather than litigation, to resolve the dispute, Qatar Airways declares that it is “ready to see this matter through to trial”.

“The required early disclosure from Airbus will give us an insight into the true nature of surface degradation affecting the A350s,” the airline says.

Qatar Airways has focused heavily on remarks made by the judge over the nature of the skin-paint deterioration – particularly a comment, based on Airbus viewpoint, that there is “no simple fix” and that patching the areas affected is currently the only option.

While the airline claims this shows the issue is not simply cosmetic, the judge’s remarks about the skin-paint condition crucially do not address the central dispute over airworthiness and safety – on the basis of which the Qatari regulator has grounded 23 A350s and the airline has refused to accept further A350 deliveries.

“I emphasise that I am dealing here only with the facts and not the question of the implication of those facts for the allegations of breach of contract or otherwise,” the judge said.

Qatar Airways claims the accumulated damages Airbus owes the airline, as a result of the grounding of the A350s, amounted to $1.08 billion by the end of March.

Airbus reiterates that Qatar Airways is misrepresenting the safety of the A350, and that it is “pleased” that – with the judge’s dismissal of all the airline’s requests for various injunctions – the legal case can proceed with “all due speed” to concentrate on the dispute over airworthiness.

It insists the airline’s response to the judge’s comments amount to a “complete mischaracterisation” of the ruling, and points out that the court ordered the carrier to pay 97% of Airbus’s legal costs – which the airframer describes as a “barometer of what actually happened”.