Airbus completes A380 deliveries as last jet is handed to Emirates

Airbus has completed deliveries from the A380 programme, with the final aircraft handed over to Middle Eastern carrier Emirates.

The aircraft - MSN272, bearing the registration A6-EVS – brings total deliveries of the type to 251, including 123 for the Dubai-based airline.

Emirates is by far the largest customer for the A380, having been the first to commit to the aircraft in 2000, and had effectively kept the programme going as Airbus struggled to secure sufficient orders to give the A380 much-needed momentum.

But even Emirates ultimately decided it did not want all the aircraft it had previously ordered, and its withdrawal signalled the end for the double-deck jet. Airbus opted to terminate the programme in early 2019. 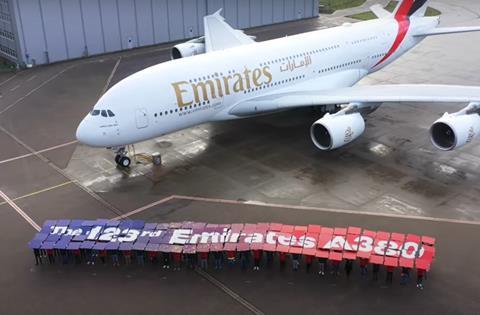 “It gave us the opportunity to redefine the travel experience, efficiently serve demand at slot-constrained airports, and bolster our network growth,” he says.

MSN272 is one of a number of A380s in the fleet configured with a layout that includes a premium-economy cabin.

“Compare it with our very first A380 delivered back in 2008 and you’ll see the myriad of enhancements and upgrades invested in ensuring that the Emirates A380 experience is unparalleled,” says Clark.

Fifty-two of its A380s will be retrofitted with the premium-economy seating as part of a cabin overhaul.

Airbus chief executive Guillaume Faury says the carrier has shown “unwavering trust” in the aircraft, adding: “The A380 has touched the lives of so many passengers by setting new standards in terms of flying and travel experience. I’m confident that it will continue to do so for decades to come with Emirates.”