Airbus has concluded its first flight-hour services contract in Central Asia with an A220 pooling and component repair agreement with Kyrgyzstan’s Air Manas.

The airline has introduced a single A220-300 to its fleet, through a lease deal with GTLK, and has indicated plans to take a second this year.

Air Manas shareholder Alexander Belovol says the “rejuvenated” carrier, after a “long quarantine”, will “become part of the larger aviation world” with the aircraft type.

He says the Airbus servicing pact will provide the “highest level of support” for the A220.

Airbus disclosed the agreement with the airline during the week of the MAKS 2021 Moscow air show.

“This is the first flight-hour services contract for Airbus in Central Asia,” says the airframer, adding that it will ensure parts availability and help the carrier reduce costs.

“It demonstrates the value of [our] maintenance solutions, helping to enable smooth operation of customers’ aircraft as passenger traffic continues to recover.”

Over the past six months, Airbus says, it has reached 11 similar flight-hour service contracts with operators. 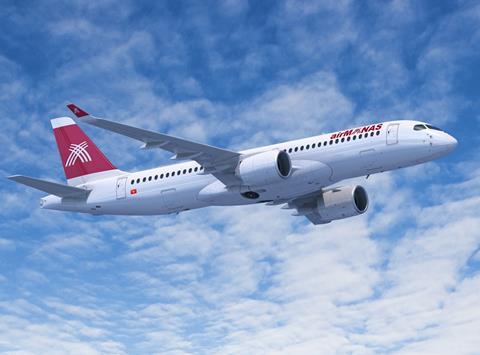 The hourly service contract includes access to the Airbus spare-parts pool and repair services for the type.

“Another benefit of this collaboration is Airbus’s engineering expertise as the most qualified supplier of components for the A220,” says the airframer.

“This will help improve the reliability of Air Manas’ fleet and simplify the return of aircraft to the lessor.”