British Airways has taken delivery of an initial batch of sustainable aviation fuel under its agreement with Phillips 66, staking a claim as the first airline to start using such fuel produced on a commercial scale in the UK.

The Humber refinery, in the north-east of the country, is producing sustainable fuel from waste feedstock.

It is being introduced to the pipelines which feed London Heathrow and a number of other UK airports.

“Our supplies of [sustainable fuel] will allow us to progress with our ambitious roadmap to reach net zero carbon emissions by 2050 or sooner,” says BA chief Sean Doyle.

Parent company IAG is aiming to power 10% of its flights with such fuel by 2030. 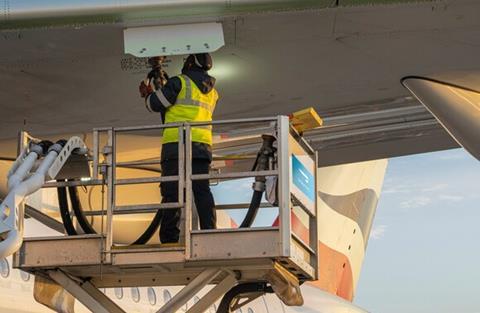 Phillips 66 is producing the fuel from waste feedstock

“Progressing the development and commercial scale-up of sustainable aviation fuel will be a game-changer and crucial to reducing the aviation sector’s reliance on fossil fuels,” adds Doyle.

IAG is investing $400 million in sustainable fuel development over the course of the next two decades. BA has established partnerships with several suppliers to establish plants and purchase the fuels.

“We were the first in the UK to co-process waste oils to produce renewable fuels and now we will be the first to produce sustainable aviation fuel at scale,” says Humber refinery general manager Darren Cunningham.

“We’re currently refining almost half a million litres of sustainable waste feedstocks a day, and this is just a start.”