Proposed US start-up carrier Connect Airlines is ordering 75 converted ATR 72-600 turboprops, which will be fitted with hydrogen-fuelled powertrains.

Universal Hydrogen was founded by former Airbus chief technology officer Paul Eremenko, and has an advisory board which includes ex-Airbus chief Tom Enders.

“We have committed to being the world’s first true zero-emission airline and the only way to accomplish this in the near term is with hydrogen,” insists Connect chief executive John Thomas. 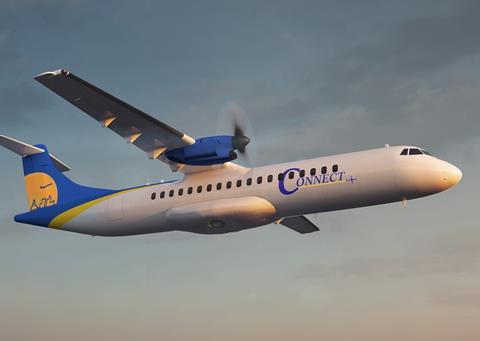 Connect has outlined a firm order to convert 75 ATRs

Deliveries of the aircraft will start in 2025, according to Thomas, who claims that the new airline’s fleet could expand to over 800 aircraft to support a North American route network.

“We see the partnership with Universal Hydrogen as the fastest path to zero-emission operation,” he says.

Eremenko says the Connect order puts the company “firmly in the vanguard” of the “march” to set aviation on a path to meet emissions targets.

“This march will very soon need to turn into a sprint if the industry has any hope of decarbonising in time without having to curtail the growth in passenger volumes,” he adds.

He says there will be a need to convert “most of the regional fleet” in the current decade and ensure that newly-built single-aisle aircraft in the 2030s are hydrogen-fuelled.

“There is no other way to get there,” he adds.

Under the agreement with Connect Airlines, Universal Hydrogen says it will provide fuel services to the would-be airline’s fleet.