Israeli flag-carrier El Al has posted a $166 million net loss for the first half of 2021, a reduction on the interim loss of $244 million last year.

El Al says its operating loss for the second quarter of $57 million was lower than the $77 million of the first.

It is also claiming a second consecutive quarterly positive EBITDAR figure, an improvement it attributes to increased activity volume.

“The crisis has led to heavy financial, operational and commercial effects,” says the carrier, pointing out that its operations suffered after a “near complete closure” of Tel Aviv airport in the first quarter. 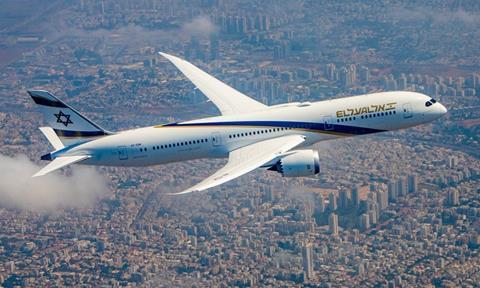 The Israeli vaccination campaign has enabled gradual removal of traffic restrictions and the airline benefited from being able to resume services to a number of destinations in the second quarter.

Passenger traffic increased five-fold in the second quarter compared with the first. El Al increased capacity by 3.8 times and this resulted in second-quarter load factor rising to 67.3%.

But El Al says there is a “gap” developing between the recovery trends and the assumptions previously made by the airline’s management over the prospects for its activity in 2022.

The carrier adds that it is working to adjust its business plan, and has sought to postpone a planned share issue intended to raise at least $105 million.

El Al’s auditor, Deloitte, has highlighted the airline’s bid to defer this raising of capital and its exploration of potential alternative financing options, and it cautions that there are still “significant doubts” as to the carrier’s ability to continue as a going concern.

It also points out the company’s exposure to legal class actions. El Al mentions in its financial statement that lawsuits of $1.48 billion are pending against the company, although the carrier says it does not expect losses beyond a relatively small provision set aside in its statement.