Emirates to offer GX Aviation broadband on A350 fleet

Middle Eastern carrier Emirates is to offer Inmarsat’s GX Aviation high-speed broadband connectivity on its Airbus A350 fleet, which it expects to enter service next year.

Emirates says the A350s will be the first aircraft in its fleet to use the GX satellite network.

The Dubai-based carrier has 50 A350s on order, all currently listed as the -900 variant.

Emirates revealed last year that it had selected the Thales Avant Up in-flight entertainment system for installation in the twinjets. 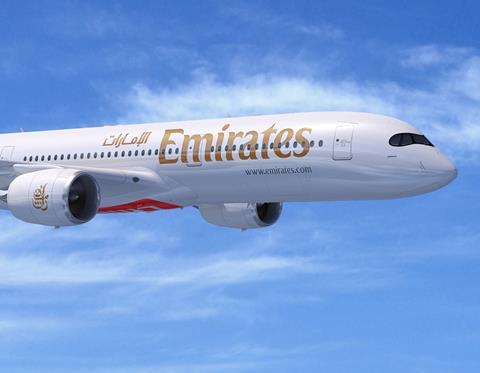 Emirates is aiming to introduce A350s from 2024

“We understand the importance of being connected during flights,” says Emirates chief operating officer Adel al Redha. “The advanced capabilities being introduced by the forthcoming satellites are particularly important, as this will boost capacity across our global network.”