Middle Eastern carrier Etihad Airways has carried out its first scheduled flight to Israel, following the diplomatic normalisation agreement between Israel and the United Arab Emirates.

The Boeing 787-9 (A6-BLA) touched down on Tel Aviv Ben Gurion airport’s runway 12 at about 12:20 after arriving from Abu Dhabi, via northern Saudi Arabian airspace, on 6 April.

Israel and the UAE signed a diplomatic recognition agreement, the Abraham Accords, in September last year and Etihad had previously stated that it intended to open Tel Aviv services as a result.

Flight EY598 carried a diplomatic and economic delegation, including Etihad Aviation Group chief Tony Douglas, the UAE ambassador to Israel Mohamed Al-Khaja and the Israeli head of mission to the UAE Eitan Nae’eh. 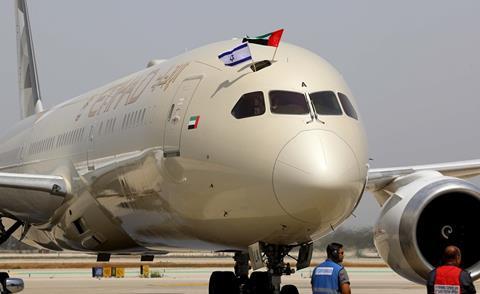 Douglas describes the service as a “hugely significant moment” for the carrier.

“We are tremendously excited about the opportunities this poses to Etihad, and our home Abu Dhabi,” he adds.

Etihad says the twice-weekly service will be operated by 290-seat 787-9s, the configuration featuring 28 business- and 262 economy-class seats.

It claims there is “significant” demand for travel between the two countries, in both the business and leisure sectors, underpinned by high rates of coronavirus vaccination in Israel and the UAE.

Israeli flag-carrier El Al is poised to co-operate with Etihad Airways, including codesharing, under broad pact provisionally agreed in November. The airlines plan to expand the tie-up to loyalty programmes, cargo, training and maintenance.