ITA prepares to put initial A350 into intercontinental service

Italian carrier ITA Airways is preparing to put its initial Airbus A350-900 into service on its network of American and Asian routes this summer.

The first of the Rolls-Royce Trent XWB-powered twinjets has been undergoing preparatory test flights at Toulouse before entering operation.

ITA states that the aircraft will join its fleet in June.

The A350 will be used to operate intercontinental routes on the airline’s network from Rome Fiumicino, which will include Buenos Aires, Sao Paulo, Los Angeles and Tokyo.

“Arrival of the flagship aircraft will enable the company to offer modern, environment-friendly aircraft featuring cutting-edge technology,” says the carrier.

It says it will provide an “important step” towards sustainable operations and support the airline’s environmental targets. 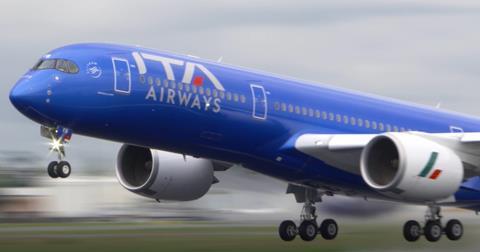 ITA’s initial A350 airborne from Toulouse during a test flight