Japan clears ANA to switch pilots between A320s and A380s

Japanese operator All Nippon Airways is introducing mixed-fleet flying between the Airbus A380 and A320 family, enabling crews to switch between long- and short-haul operations.

ANA will be the first carrier to bring in the capability between the types, following clearance from the Japanese civil aviation regulator.

The carrier has three A380s, which were introduced to operate services to Hawaii, as well as some 40 A320-family jets.

Airbus mixed-fleet flying enables pilots to be cleared to operate more than one type from the airframer’s range – allowing crews to be utilised more efficiently.

Airbus Japan president Stephane Ginoux says the capability provides “increased flexibility”, adding: “The increase in revenue hours flown by pilots due to less standby and downtime results in a significant improvement in productivity.” 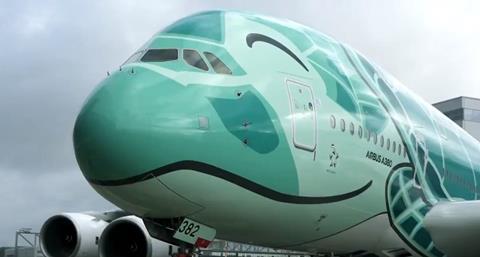 All Nippon Airways has three A380s