KLM pilots have requested talks with the Dutch finance ministry after the government suspended a rescue loan to the airline over its failure to meet the attached labour conditions.

Pilot union VNV had held off from signing a commitment clause intended to ensure that labour agreements could be extended for the duration of the loan term.

The refusal to sign led the government to reject the airline’s restructuring programme, which had been submitted on 1 October, and freeze KLM’s loan withdrawals. 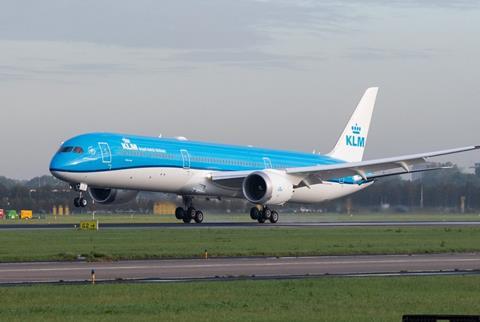 VNV points out that it agreed an “extensive savings package”, with pilots contributing 20% annually, as part of the restructuring.

It claims the commitment clause is a “last-minute” addition to the agreement, and that it was not given a “reasonable” period to consider the change – stating that, on the deadline date of 31 October, it was given 45min to sign the text as it stood.

The cockpit union insist that “it goes without saying” that the pilots are “fully committed” to making suitable contributions, once the agreement ends, to preserve the airline’s future, and that the union has “explicitly confirmed” this commitment to KLM and the government.

“We have assumed that this provided sufficient guidance for the government,” it adds.

“If this extensive wage sacrifice and commitment is insufficient in the view of the minister, we would like to discuss this with the ministry as soon as possible.”

But it has outlined several concerns which led to VNV’s not signing the commitment clause, claiming that unions have not been given full access to the loan contract between KLM and the government.

VNV adds that the intense restructuring negotiations resulted in a specific agreement, and the demand to include the commitment clause means the foundation of the agreement is “potentially significantly changed”. The term of the commitment – the duration of the loan – is “indefinite”, it says, pointing out that collective labour agreements in the Netherlands have a five-year limit.

“This means we’re being sent back to the drawing board,” the union states, which also argues that the government is trying to “dictate” the outcome of future collective bargaining “in advance”.