Russian authorities have transferred 571 foreign-built passenger aircraft to the domestic register, out of a total of 781, according to first deputy prime minister Andrei Belousov.

Belousov disclosed the figure during a presentation on measures adopted by the government to stabilise the Russian economy in the face of sanction pressure.

“The aircraft fleet of Russian airlines has been preserved and their safe operation arranged,” he told the Federation Council on 13 April.

Airlines in Russia had been using hundreds of aircraft assigned to the Bermudan and Irish registries, and the two overseas aviation authorities have safety oversight responsibility for these fleets.

Re-registration without their owners’ consent is a breach of ICAO standards and both the Bermudan and Irish authorities have withdrawn the certificates of airworthiness for the aircraft operated by Russian carriers. 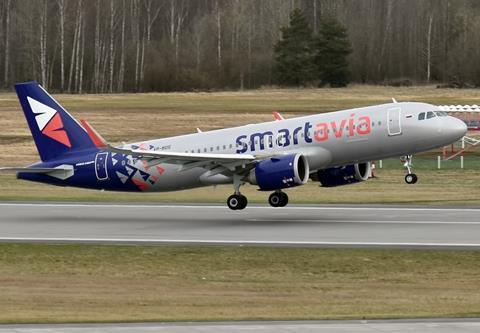 Stabilising the transport system and organising new logistics corridors, Belousov said, was among the government’s priorities.

The transport network has received a “double impact”, he says, from restrictions resulting from international sanctions and a “dramatic” change in the directional flow of goods.

Russian airlines will be subsidised by the government, says Belousov, receiving up to Rb110 billion ($1.3 billion) to support their operations.

These subsidies will be distributed in accordance with the number of passengers transported and the distances involved.

Some Rb27.5 billion will be allocated to ensuring connections are maintained in the eastern regions of Russia, as well as Crimea and Kaliningrad. Another Rb19.5 billion will be set aside to refund passengers for cancelled flights.

Belousov says the air transport measures are being taken to “ensure operation of airlines” and the conveyance of passengers over the summer and autumn seasons.