Provisional liquidators of South African regional carrier SA Express are attempting to find a buyer for the airline, claiming that they are engaging with six or seven parties which have expressed interest in the company.

Their effort follows court approval on 15 June to extend their powers, in order to explore the possibility of attracting investment in the airline.

Final liquidation orders for SA Express – which would have simply resulted in the dismantling of the company and disposal of its assets – have been postponed until 6 September, giving the provisional liquidators a three-month window to secure a deal.

One of the liquidators, Aviwe Ntandazo Ndyamara, disclosed the situation as he belatedly testified to the parliamentary standing committee on public accounts on 17 June.

The liquidators had previously been due to appear before the committee but failed to show – apparently due to a communication mix-up – and the committee chair, Mkhuleko Hlengwa, had threatened to subpoena them.

Ndyamara stressed that there had been “no intention” to undermine the process and that the liquidators had wanted to provide a proper update on the SA Express situation.

He told the committee that interest in the airline had emerged from several potential investors.

“There are six interested – in fact, from this morning, there’s about seven interested parties that we’re currently engaging,” said Ndyamara.

“The next route for us is to proceed with an investment or a sales process – a transparent process where we either attract an investor or, alternatively, we pursue the disposal of the assets of the airline in order to satisfy creditors’ claims.” 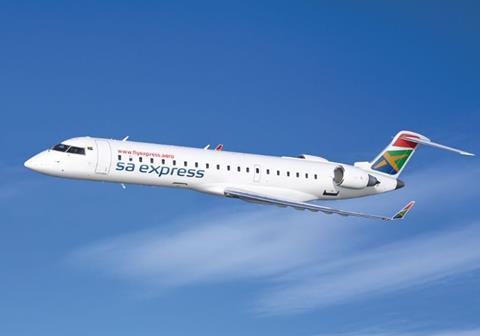 While a final liquidation order has been pushed back, Ndyamara pointed out that the airline holds two licences which are scheduled to expire on 31 July. It also has an aviation security training organisation approval which expires on 31 December.

He says the liquidators aim to engage a sale or investment process before the expirations.

The situation is further complicated by SA Express aircraft and engine lease agreements amounting to R22.5 million per month, plus monthly office and hangar leases of R2.2 million.

Ndyamara says that these lease agreements are “onerous” and “immediate consideration” must be given to their termination. But he adds that this could have an impact on the licences.

“This is critical for us,” he says.

Ndyamara says the team’s priority was to reduce the costly R1.8 billion ($104 million) security bond put in place to protect the company’s assets. This involved carrying out an independent market assessment, which evaluated the assets at R103-120 million and reduced the bond to R113 million.

SA Express had around R800,000 in cash reserves in its bank accounts, which was ring-fenced.

Ndyamara says that, at the time of the provision liquidation order on 28 April, employee salaries for March and April were still outstanding.

Employee contracts were immediately suspended as a result of the order. Outstanding remuneration, says Ndyamara, will be dealt with as claims against the company.

While employees have special preference under insolvency law, however, they will only be paid after secured creditors’ claims have been settled.

“At this stage it is unclear if there will be residue for payment of the employee claims,” says Ndyamara.

Chair Mkhuleko Hlengwa says that, following the briefing on SA Express and the previous update on South African Airways’ business rescue, the committee members have resolved to schedule hearings with former boards of directors of state-owned entities.

He says the briefing suggest that the collapse of SAA and SA Express might have occurred, in part, as the result of “lack of governance”.

“Questions were raised about the role played by the former boards of directors in ensuring proper governance and effective consequence management at state-owned companies,” he adds.

Committee members also plan a hearing with the government’s department of public enterprises to “ascertain the loopholes” which, Hlengwa says, have contributed to “failure of effective oversight” of these firms.

“[The committee] is also concerned with the movement of senior executives from one entity to another under the department’s watch and wants the department to justify these recruitment processes,” he adds.

Representatives of South Africa’s treasury and anti-corruption law-enforcement agencies will similarly be invited to brief the committee, as part of continuing probes into alleged cases of financial mismanagement.