Over this period the fleet would be gradually built up to around 26 aircraft, comprising seven long-haul jets – about half of which would be in place at the end of this year – plus nine narrowbodies, and 10 smaller aircraft.

SAA would have 40% fewer aircraft than it had before entering business rescue last December, when the fleet heavily favoured long-haul types.

Reshaping the fleet over the period to January 2021 would enable operations to be revived in accordance with the lifting of lockdown measures, initially covering domestic and regional services before the re-introduction of intercontinental flights.

The proposed route network, set out in the business rescue plan, comprises long-haul services to New York, Washington, London, Frankfurt, and Perth, plus some 20 major cities primarily in Africa, and three domestic links. 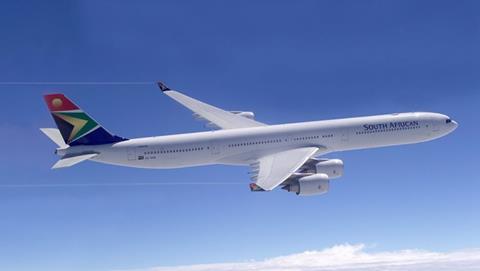 For the first three months, the plan says, the revived airline would require about 1,000 personnel.

“It is anticipated that the final staff number will increase in accordance with the market conditions and passenger demand,” it adds.

During the ramp-up phase, the expanding business will need just under 2,900 employees.

“As the operations of SAA stabilise, and eventually increase, it is anticipated that more staff will be required,” says the plan.

“On a commercially viable and sustainable basis the company will employ more staff, with a preference being given to former SAA employees subject to competence, skills and suitability.”

SAA previously employed just over 4,700 personnel including 617 pilots and more than 1,500 cabin crew.

The plan expects a voluntary severance agreement to be concluded through employee consultations, with 1,000 jobs being retained – under new terms and conditions – for the initial start-up.

Given the number of employees likely to be retrenched, the severance package will cost about R2.2 billion ($127 million). This will form part of the overall R26.7 billion costs for restarting SAA.