SAS is warning that industrial action by pilots is reckless and threatens the survival of the company, after it failed to avert a strike by cockpit crews.

Efforts at mediation had twice deferred a strike notice, pushing it back from 29 June until 4 July.

But SAS says the members of its pilot unions have been called out on strike and it expects half of its services – and around 30,000 passengers – to be affected daily.

SAS is attempting to transform its business, under a scheme called ‘SAS Forward’, which includes slashing its cost base. Pilot unions have been objecting to SAS’s seeking a reduction in terms, and its use of staffing agencies to recruit crews for its new lower-cost operating arms, SAS Link and SAS Connect.

“A strike at this point is devastating for SAS and puts the company’s future, together with the jobs of thousands of colleagues, at stake,” says SAS chief Anko van der Werff.

“The decision to go on strike now demonstrates reckless behaviour from the pilots’ unions and a shockingly low understanding of the critical situation that SAS is in.” 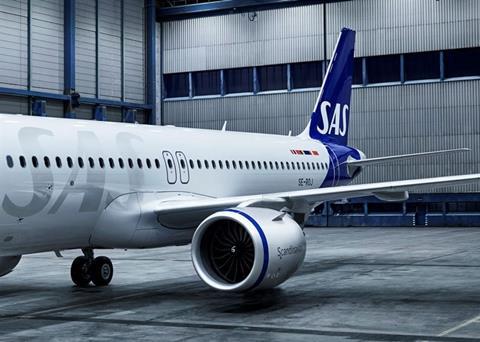 If the action is prolonged, the company says, the financial and liquidity impact on the company “could become material”.

SAS says it wants to continue mediation in order to end the industrial action “as soon as possible”.

It points out that its SAS Link and SAS Connect services are not affected by the strike.

“We are ready to resume mediation as soon as possible and we will do our utmost to reach an agreement that is viable to secure the long-term competitiveness and financial sustainability of the company,” says van der Werff.