Middle Eastern carrier Saudia has formally reached an agreement to take CFM International Leap-1A engines for the Airbus A320neo-family fleet it ordered in 2019.

The airline ordered 30 A320neos and 35 A321neos after opting to scrap a previous agreement for the Boeing 737 Max.

But CFM builds the Leap-1B for the Max and Saudia has chosen to retain the engine manufacturer for the Airbus agreement.

Saudia is ordering 149 Leap-1A engines and the deal includes a multi-year, rate-per-flight-hour services pact. This also covers 20 leased A320neos in addition to the newly-ordered powerplants.

The agreement – valued at $8.5 billion at catalogue prices – was unveiled during the official visit on 4 December of French president Emmanuel Macron to Saudia Arabia.

Saudia is already a strong customer of CFM with 61 conventional A320s fitted with the CFM56 engine, while budget division Flyadeal has 11 CFM56-powered A320s as well as five Leap-powered A320neos. 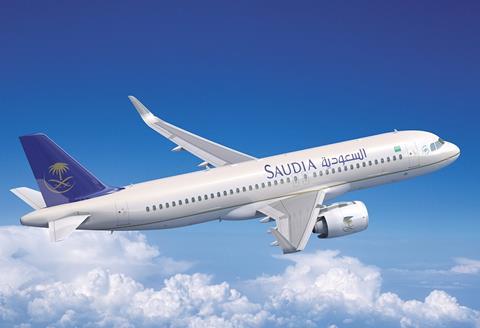 Saudia switched to the A320neo family from the 737 Max

CFM says it will support Saudia Aerospace Engineering Industries to develop its own Leap-1A engine overhaul operation as part of the deal.

“We look forward to introducing further Leap engines into our fleet and we believe that this engine will be a real asset in terms of efficiency and cost-effectiveness,” he adds.