British Airways and Iberia parent IAG is expecting an operating profit for the full year, pre-exceptions, and for the third-quarter figure to improve significantly on that in the second.

IAG has turned in an operating profit of €293 million ($299 million) for the three months to 30 June, although the company remained loss-making in the first half with a deficit of €438 million.

While it maintains an optimistic outlook regarding its financial performance for the rest of the year, it stresses that the forecast assumes no further setbacks relating to the pandemic or geopolitical developments.

IAG’s return to second-quarter profits – for the first time since the pandemic crisis – follows strong recovery in demand across its various carriers.

All four of its main carriers were profitable at operational level.

Iberia led the rank with a second-quarter operating profit of €93 million, while British Airways showed its first such profit since 2019 at £54 million ($66 million).

Spanish budget carrier Vueling turned in a €40 million surplus, ahead of Aer Lingus at €15 million.

While British Airways managed to improve its second-quarter figures, it was IAG’s worst performer over the first half of the year, with an operating loss of €424 million.

IAG states that BA’s capacity over the second quarter was limited to 69% of pre-crisis levels, owing to the “acute” operational challenges at its London Heathrow base. But it expects to raise this to 75% in the third quarter.

Spanish carriers fared better, with Iberia managing to scrape a small operating profit of €4 million for the first half while Vueling limited losses to €52 million. 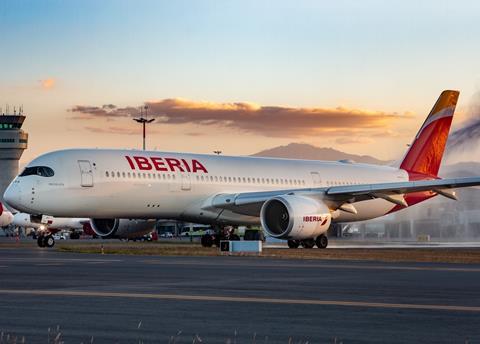 “Iberia and Vueling were the best-performing carriers within the group,” says chief executive Luis Gallego. “The Spanish domestic market and routes to Latin America continued to lead the recovery.”

Gallego adds that premium leisure traffic “remains strong” while business travel is continuing a “steady recovery” across the company’s airlines.

“Although bookings into the fourth quarter are seasonally low at this time of year, we are seeing no signs of any weakness in demand,” he insists.

Overall IAG passenger capacity for the second quarter reached 78% of the same figure in pre-crisis 2019, up from 65% in the first.

IAG says this was driven primarily by European short-haul operations, as well as higher capacity on North American and Latin American routes.

It expects to reach 80% of pre-crisis capacity in the third quarter and 85% in the fourth – a 5% reduction for the second half, mainly in response to the Heathrow issues.