Airbus has delivered its first aircraft, an A321LR to Titan Airways, fitted with a line-fit in-flight entertainment system based on wireless communications architecture.

Airbus says the open-software architecture provides airlines with the flexibility to source their content from a variety of wireless in-flight entertainment partners.

Titan Airways is taking its content from Bluebox Aviation Systems.

Bluebox says the delivery of the A321LR (G-XATW) took place on 26 October. Airbus lists this delivery as having been through US lessor Air Lease.

Titan is one of five launch customers for the system, a mix of lessors and airlines taking both line-fit and retrofit versions. Airbus intends the system to apply to twin-aisle aircraft as well as single-aisle.

Airbus says that the ability to avoid hardware-related installation issues and pre-load customised content enables carriers to “simplify” the process of transferring aircraft between operators or lessors.

Bluebox says it was the first wireless in-flight entertainment partner selected by an airline customer for the programme.

Line-fit installations such as Titan’s, it says, involve integration of the in-flight entertainment portal after the aircraft’s transfer-of-title, from Airbus to customer, is completed. 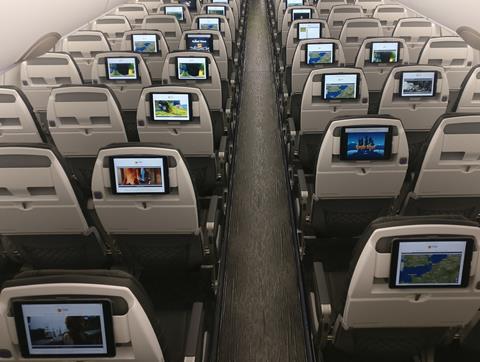 Final system testing and a 2h trial flight took place at London Stansted, Titan’s base, at the end of October. The test involved 150 tablets set up on the twinjet to test performance, content streaming, moving maps, connectivity and other aspects.

“Enabling that final link to passenger devices – for entertainment, retail, and other in-flight engagement applications – from the point of aircraft delivery will become the new standard, and we’ve proven we can deliver it,” says Bluebox chief technology officer James Macrae.

Titan is planning to introduce a second A321LR to its fleet in spring next year.

Airbus produces the hardware for the system through its KID-Systeme subsidiary. Several other wireless in-flight entertainment content partners are subscribed to the open software platform, including Inflight Dublin, Collins Aviation and Display Interactive.