Ukraine’s government has opted to allocate Hr16.6 billion ($590 million) in funds to cover insurance for aircraft operating within the country.

The measure is intended to protect the country’s airlines after carriers informed that they were set to lose insurance coverage over the risk of armed conflict.

Under the plan, additional reserves fund from the state budget will be allocated separately to a ministry of infrastructure account.

“[This] decision is a signal to the international community that Ukraine is ready to assume financial obligations for the safety of aircraft in Ukrainian airspace,” the ministry says.

It adds that at least 23 aircraft are covered by the funds, which will be returned to the budget if they are unused.

“Most flights to and from Ukraine are being conducted normally,” says infrastructure minister Alexander Kubrakov.

“We are in constant contact with our international partners and Ukrainian companies to prevent any possible crisis situation.”

Budget carrier SkyUp, which had expressed concern over the potential disruption, says negotiations with insurers has been “difficult” but the joint government efforts have “managed to achieve results”.

It has reinstated ticket sales, says chief executive Dmitry Seroukhov. “Flights to Ukraine remain safe and secure. This is a great example of effective co-operation between business and government but, most importantly, guarantees to all passengers that they can safely plan a trip.” 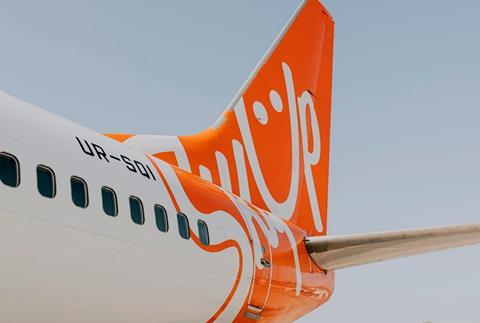 SkyUp is among the carriers affected by the insurance situation