Budget carrier Wizz Air has shifted towards euro-denominated lease contracts as part of a strategy to counter the effects of economic conditions.

The airline has turned in a first-half operating loss of €63.8 million ($63 million) for the six months to 30 September.

But a net foreign-exchange losses amounting to €269 million pushed the company into a net loss of €384 million.

“The significant net foreign exchange loss accounted for in the period is mainly caused by the foreign exchange translation of the net unhedged US dollar lease liability position,” it says.

Wizz Air says has implemented “remedial” measures during the period to mitigate the “volatile” macro-economic conditions.

The airline is also including caps to rent formulas, limiting the effect of rising interest rates, and advancing aircraft with euro pre-delivery payments into next year’s delivery stream.

While the six-month period resulted in losses, Varadi says the airline managed to generate a “strong” performance in the second quarter following a “difficult” first.

He states that “much has been done” to address the operational issues which affected the air transport industry earlier this year.

“Our operational performance has recently normalised and we are now back in line with our historically low levels of cancellations and flight disruptions,” he says. 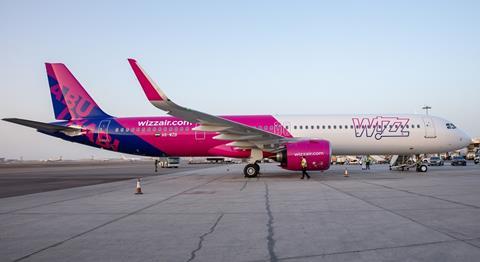 Wizz Air is diversifying its network with Middle Eastern routes

Second-quarter revenues were up 41% compared with the same period pre-pandemic, with load factor and yield improving. The airline says the traffic was “no longer held back” by the pandemic or the Ukrainian conflict.

As a result, earnings at EBITDA level were “strongly positive” at €374 million for the second quarter and took the first-half figure to €218 million.

WIzz Air adds that its liquidity position was unaffected by foreign-exchange moves and stood at €1.63 billion in total cash at the end of September.

The airline aims to operate 35% higher capacity for the winter season compared with pre-crisis levels, says Varadi, while new routes to the Middle East, diversifying its network, will “moderate” seasonal effects.

He says the airline will return to pre-crisis utilisation levels in spring next year, after lower utilisation in the winter, and it aims to be “levelling the playing field” on fuel costs with restoration of systematic hedging of fuel and emissions credits.

Varadi says the winter will present “some uncertainty” relating to macro-economic circumstances, the airline’s network growth, diversification and fleet expansion leaves it “well-positioned to drive profitable growth in the future”.