While the air transport downturn is triggering pilot reductions at multiple airlines, budget carrier Wizz Air is persisting with a new training scheme for cabin crew who want to pursue a career in the cockpit.

Wizz plans to start its first course around November-December, with a target of 20 cabin crew for each intake. It plans four or five courses in 2021, depending on the number of applications.

“We already have 40 applicants,” says the carrier. “We expect the number of candidates to grow gradually, and that the first successful cadets will inspire others to join.”

The airline had started discussing the initiative to train cabin crew as pilots around November last year, before the economic crisis engulfed the industry.

Although the crisis is increasing the pool of available pilots, Wizz Air’s intention is to encourage women – who still make up the larger proportion of cabin crew – to increase the diversity in the cockpit, where women remain a small minority.

The airline wants to achieve 25% female representation in the cockpit by 2030.

“While we will continue to hire pilots through the usual recruitment channels, this scheme will provide a pipeline of talent to support Wizz’s future growth plans,” the carrier says. 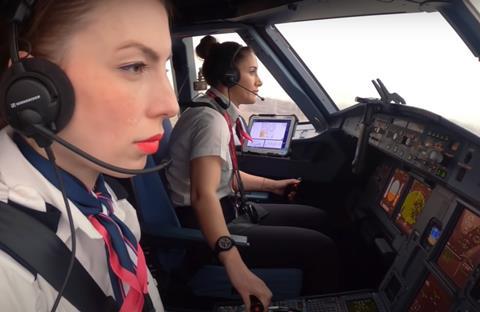 It opened the scheme initially to cabin crew in Hungary, Romania, Poland and Bulgaria but has since extended it to the entire Wizz network.

The airline believes a crucial part of the scheme is that cabin crew already understand the particular demands posed by a career in flight operations.

“They are already aware of what the pilot lifestyle entails,” says the carrier. “They know what they are undertaking.”

It adds that its cabin crew “fit the Wizz culture” and have loyalty towards the company.

While the scheme has diversity as a driver, the airline is offering the conversion course to male cabin crew as well, but is confident that this will not undermine its efforts.

“We would like to give anyone who is interested in being a pilot a chance through our recruitment process,” it says, adding that it is offering to support family considerations – one of the elements which can dissuade women – with such options as relocation and part-time work for pilots with young children.

Wizz Air’s conversion programme spans 40 months including 22 months of ab initio ground training and 18 months of flight training at the carrier’s Trener flight academy in Hungary, before joining the airline as a first officer on Airbus A320-family jets.

Cabin crew will remain employed by the airline during the whole training period, which will provide security, and will have the chance to rotate monthly between work and study – a tailored programme which enables trainee pilots to learn more about the pilot role during their working periods.

This flexible schedule solves a problem of long absence from the cabin crew role which, along with the training investment needed, might explain why other carriers have resisted such schemes.

“It may result in a higher proportion of pilots at the end of the day,” Wizz adds. “If they are selected through the recruitment process in the beginning, and do their best to study and complete all the exams, they get the opportunity to join the flight deck team.”

This offers a more certain career path than that for cadets who have to fund their own training and then pass a selection process with an airline.

Should a trainee on the Wizz scheme fall short of the standards necessary to qualify as a pilot, the airline will offer the option – subject to vacancies – to return to their full-time cabin crew positions during the first 22 months of the course.

“It is a great opportunity for them to develop their career and grow within the company, as the airline continues expanding its fleet and route network,” says Wizz chief pilot Darwin Triggs.

“We believe that this programme will also support gender equality in aviation and its sustainable growth.”