AVIC is making a big push for its in-development MA700 turboprop at the 10th installment of Airshow China in Zhuhai.

Speaking to Flightglobal, AVIC Xian Aircraft Industry's vice president Wang Chengkuan says that the Chinese-made 70-seat aircraft will be the first turboprop in the world to adopt a fly-by-wire flight control system.

He adds that the MA700 will rise above the competition by incorporating the advantages of both the ATR 72 and the Bombardier Q400 into one product.

He explains that the ATR 72 is extremely economical but lacks speed, while the Q400 has the speed but losses out when it comes to costs. 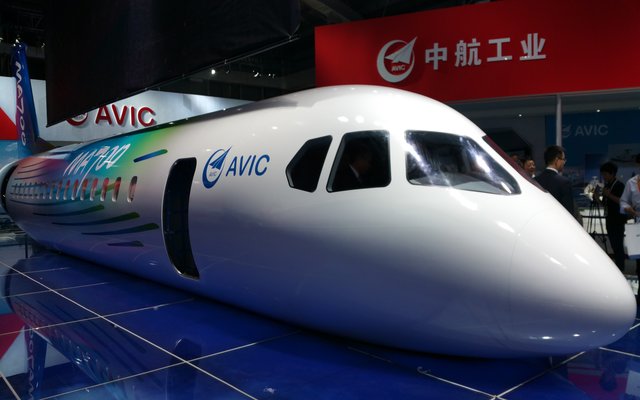 The MA700 will be powered by Pratt & Whitney PW150C engines and is touted to have an up to 10% lower fuel burn than its competitors. The new engines will give the turboprop a cruising speed of about 637km/h.

Wang adds that AVIC has decided on the suppliers for most of the systems on the aircraft, and that a domestic launch customer will be announced at the show on 11 November. The launch airline will thereafter be involved in the development of the turboprop.

A product brochure for the MA700 shows that the aircraft will have a maximum take-off weight of 26,500kg and a maximum range of 2,700km, though it is best positioned to serve markets within a 800km range. The aircraft can also be configured for between 68 and 86 seats.

For the first time, AVIC is also showcasing a large scale mockup of the MA700 at the show.

Wang says AVIC is forecasting demand for over 2,000 regional turboprops in the 60-99 seat range over the next 20 years, and that the airframer’s target is to gain a third of the marketshare.

AVIC also stresses that the MA700 is a brand new aircraft, with no "blood relations" to the MA600 and its predecessor the MA60.

The MA60/600 have mostly been sold to airline customers in developing countries in Asia and Africa.