The operator of Los Angeles International airport has approved a new lease with American Airlines that allows the carrier to move forward with the first of $1.6 billion in planned works.

American can move forward with construction of a new "terminal 4.5" core that will connect both terminals 4 and 5 at LAX with the planned automated people mover, following approval by the Los Angeles World Airports (LAWA) board of commissioners on 11 July. The $285 million initial works also include the reconfiguration of gates on terminal 5 to add two more gates, and ticket counter and baggage claim areas. 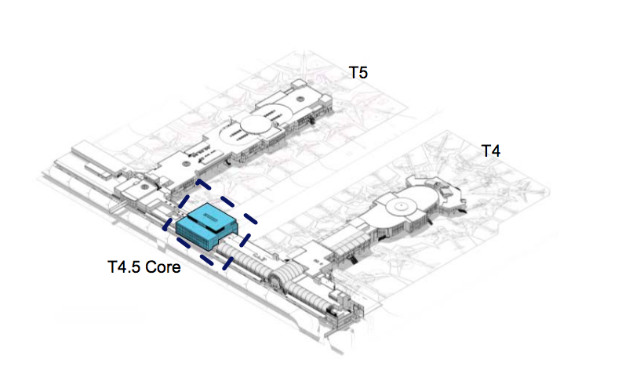 "With American being the largest carrier at LAX, we are very pleased to have the lease for your approval this morning," said Deborah Ale Flint, chief executive of LAWA, at the meeting. She emphasises circulation and customer experience improvements as part of the works.

The works approved today are only the first of a larger $1.6 billion, 15-year improvement plan for terminals 4 and 5 that American and LAX agreed to in 2017. Major aspects of that programme include the consolidated security checkpoint, a consolidated check-in area for the airline and other concourse improvements.

Katherine Goudreau, managing director of facilities at American, says at the meeting that the works covered today include improvements on the non-secure side of terminals 4 and 5. A planned consolidated security checkpoint, American check-in facility and secure connector between the two concourses will be part of later phases, though work could begin before the initial scope is complete in 2022.

The planned works come as Delta Air Lines, the second largest carrier at LAX, broke ground on its own $1.9 billion redevelopment of terminals 2 and 3 at the airport in May. The project will see both terminals practically rebuilt, with the carrier and its partners gaining preferential access to 27 gates when work is complete in 2022.

LAX is notoriously gate-tight, with every major US carrier saying their growth aspirations there are stymied by a lack of facilities.

The airport is already the second busiest in the USA, handling 84.6 million passengers in 2017, LAWA data shows. American is the largest carrier with an 18.8% share.

Passenger numbers at LAX grew 4.6% in 2017, and enplanements are forecast to continue to grow at a compound rate of 2.6% annually through 2024, airport data and a recent LAWA bond prospectus show.

American will have preferential use of 19 gates, the same number that it has today, initially under the new lease, the LAWA presentation to the board shows. That could increase to 28, including up to four in the Tom Bradley International Terminal and up to five more in terminal 5, in the future if certain criteria are met and new gates open to accommodate other carriers.

One of those criteria is American vacating its hangar adjacent across from the Tom Bradley terminal. The facility must be demolished in order for the airport to built the southern half of the Midfield Satellite Concourse.

The 12-gate northern portion of the Midfield concourse is under construction and scheduled to open in 2020. When this occurs, the carrier may be able to access more preferential gates, the presentation shows.

While the number of gates on terminal 5 will increase to 15 with the reconfiguration, Goudreau says two gates will be temporarily shut during the works.

The lease also requires American to vacate the remote regional concourse that it uses by 2024.

While American plans to invest $1.6 billion in terminals 4 and 5 at LAX, LAWA has budgeted $1.1 billion for its scope of the works, the presentation shows.

Updated with criteria that American must vacate its hangar at LAX