ANALYSIS: A network US Airways built through mergers

US Airways was an airline with ambition, growing through five separate mergers to become the fourth largest US carrier when its last flight lands early this Saturday and the name disappears into American Airlines.

Allegheny Airlines, the predecessor to US Airways, traces its roots to airmail flights in western Pennsylvania in 1939. Its network remained concentrated in Pennsylvania and the mid-Atlantic (see this 1964 map) until it acquired Lake Central Airlines in 1968 and Mohawk Airlines in 1972, resulting in a network extending from from the Ohio River Valley to New England as seen in this 1977 map.

Allegheny changed its name to USAir in 1979, as it expanded beyond its northeastern USA roots to cities in Florida and as far west as Phoenix. 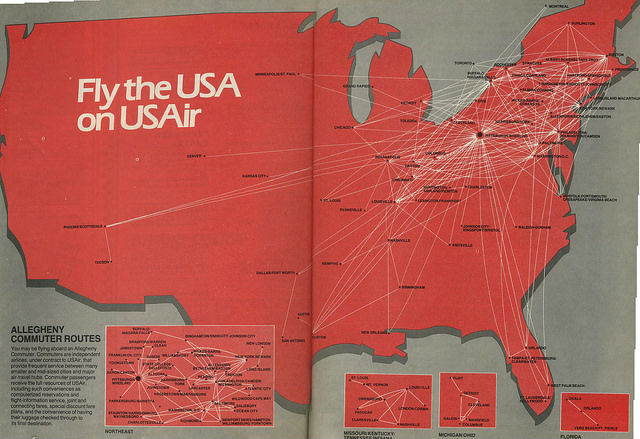 USAir grew through the 1980s under the leadership of chief executive Ed Colodny. The network focused on its Pittsburgh hub - called by many to be the "centre of the universe" for the airline - with Philadelphia becoming a hub in the second half of the decade. 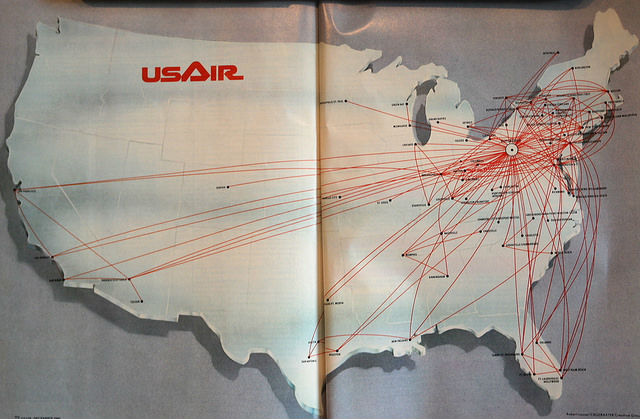 Pacific Southwest Airlines (PSA, here in 1985) was the first carrier USAir acquired in the 1980s. The merger with the San Diego-based carrier was announced in December 1986 and completed in April 1988.

“We believe that [PSA] gives us access to the largest air travel market in the country, if not the world, which is the Los Angeles-San Francisco corridor, both LAX and SFO, and also the satellite airports which are very important – Orange County, Burbank, Ontario, San Jose and Oakland, which are all part of the complex,” said Colodny in an interview with Flight International in March 1988. 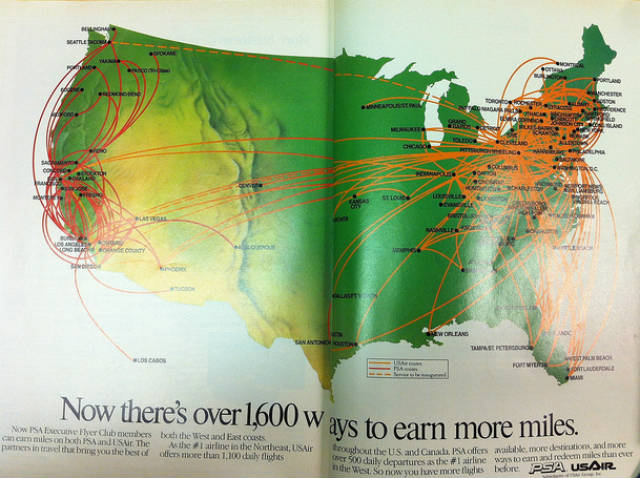 The airline’s second – and more important – merger of the 1980s was with Piedmont Airlines. The deal was announced just four months after the PSA deal in March 1987 and the two networks were integrated in August 1989.

“It was a strong, profitable company with a similarity in market background throughout,” said Colodny on the Piedmont deal in 1988. “They were committed to the local service routes, they served smaller cities, their fleet was very heavily oriented toward the twin-engine jets… and there was very little overlap between the two airlines, though we served many common cities. So, there was a chance for efficiencies in operating the two as a combined airline and together they would help us stay competitive in the area east of the Mississippi River." 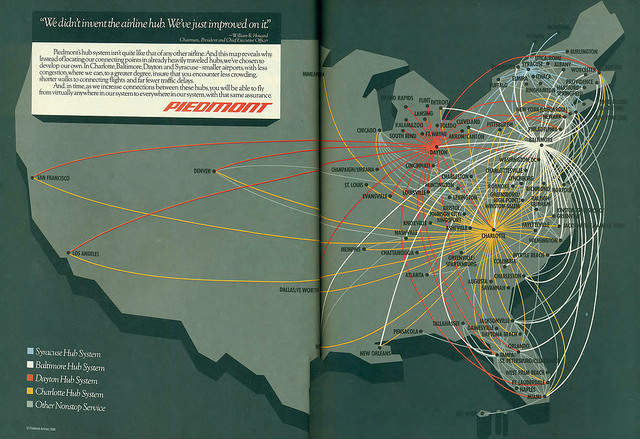 Combined with Piedmont and PSA, USAir had a formidable network – operating “426 jets in 36 states, two Canadian provinces, the Bahamas and Britain”, the Associated Press reported on the eve of the integration in 1989. 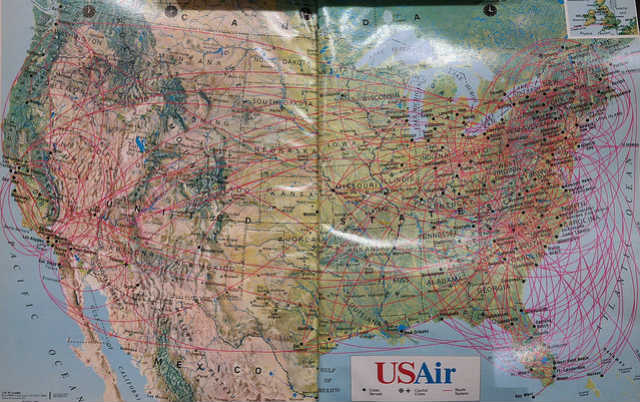 However, it was not long before network paring and pruning began. USAir reported its first annual loss in more than a decade in 1990 with the poor financial performance continuing into 1991 and driving the decision to park its fleet of BAe-146-200s, pull out of eight west coast markets inherited from PSA and cut service to its Baltimore/Washington hub and Cleveland focus city that May. The former Piedmont hubs in Dayton and Syracuse were closed.

USAir did make one lucrative acquisition in the 1990s: the Trump Shuttle. It acquired a 10% stake in the carrier, which changed its name to the USAir Shuttle, in April 1992 and acquired the airline outright in 1997.

USAir changed its name to US Airways in 1997.

The US Airways network west of the Mississippi River was relatively void by 1998 following its network cuts of the first half of the decade. 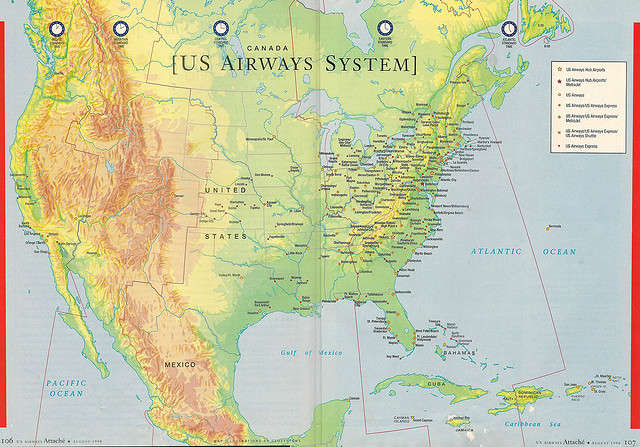 A failed merger with United Airlines in 2000, 9/11 and the growth of Southwest Airlines on the east coast, especially at its Baltimore/Washington hub, resulted in US Airways filing for Chapter 11 bankruptcy twice in the early noughties with the second one leading to its merger with America West Airlines in 2005.

The America West and US Airways networks complemented each other well, with the former concentrated west of the Mississippi and the latter east of the dividing river. 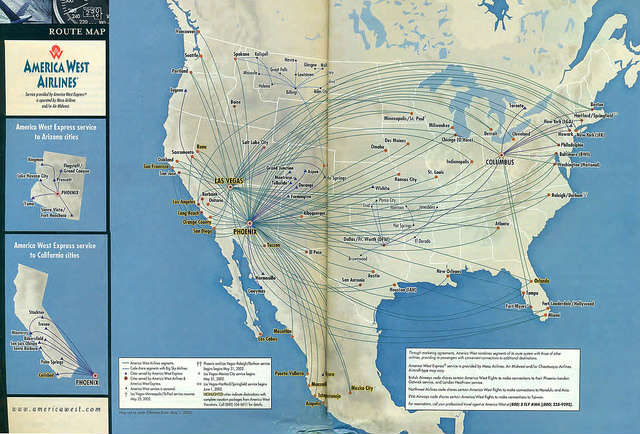 In the years following the merger, US Airways, led by the America West management team, continued to streamline its network. It closed hubs in Las Vegas and Pittsburgh and expanded its operations in Charlotte, Phoenix, Philadelphia and Washington National.

The airline’s final independent route map in December 2013 shows its continued strength in the eastern USA with Phoenix as its main outpost in the western USA.

US Airways in December 2013 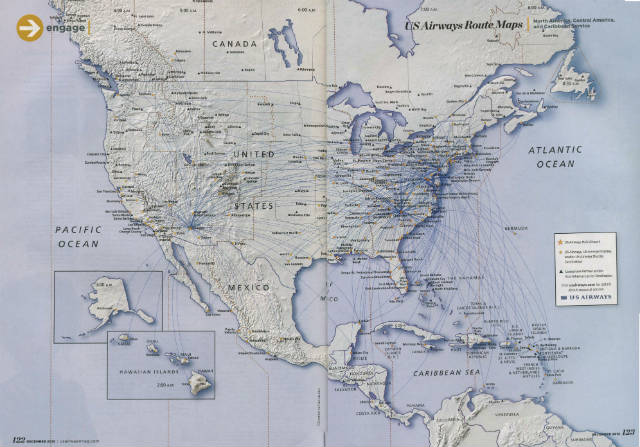 US Airways final flight 1939 will highlight these final strengths. Flying from Philadelphia to Charlotte, on to Phoenix and then to San Francisco before returning to Philadelphia and closing the book on the airline when it lands at 06:18 local time on 17 October, the culmination of the merger with American that began in February 2013.