Two years since its launch, AirAsia India is showing increasing signs of life in the competitive Indian market.

Recent statistics from the Directorate General of Civil Aviation (DGCA) show AirAsia India's market share at 2.2% from January to April 2016, up from 2.1% in April, and nearly double that of a year ago. For the full year of 2015, its market share was 1.7%.

Network wise, it operates to nine destinations out of its Bengaluru base. This is one destination short (Chennai), as compared to a year ago.

When AirAsia India first launched scheduled flights in June 2014, it only flew to Goa, Chennai and Kochi.

However, when comparing its seat capacity against that of other low-cost carriers, Capstats shows that AirAsia India is still a minnow in the market. 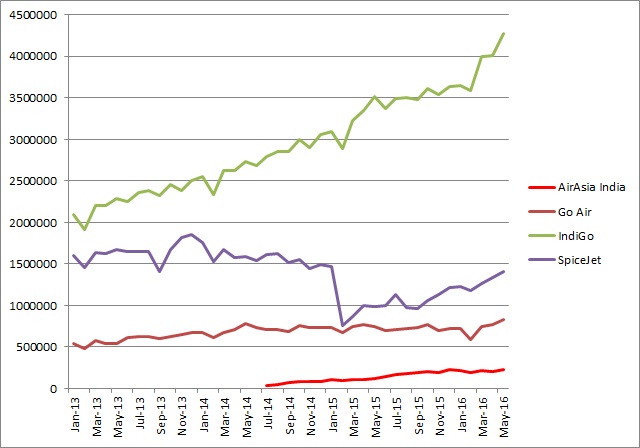 Among the four Indian low-cost carriers, AirAsia India offers the least number of seats despite being on a slow, gradual climb.

IndiGo continues to surge ahead on the back of its massive aircraft fleet, while SpiceJet takes second place despite having an irregular two years. Unless it starts to beef up its fleet more aggressively, AirAsia India will remain a bit player.

Apart from lacking anywhere near the scale to compete effectively with local rivals, the carrier has also suffered leadership issues, with founding chief executive Mittu Chandilya leaving the company in early-2016 after less than two years on the job. His replacement Amar Abrol, took over in April.

Nupur Sarraf, aviation analyst at Bangalore Aviation, says that AirAsia is just as much a beneficiary from low fuel prices as other carriers.

One area where Sarraf sees potential for AirAsia India is in the possible relaxation of the notorious 5/20 rule, which requires Indian-registered airlines to operate for five years, as well as have a fleet of 20 aircraft before they can launch international routes.

“Be it a shorter operational time, or a smaller aircraft fleet requirement, AirAsia India can act faster to launch international routes and tap on its AirAsia Group network.”

Should the 5/20 rule remain as it is, “no dramatic shifts” can be expected and that all airlines will “predominately have to rely on market forces” for growth, Sarraf elaborates.

Though AirAsia India is the smallest AirAsia affiliate, Fernandes appears set to place an inordinately high focus on the unit.

The Malaysian-born, England-raised Fernandes tweeted on 12 June that he had received his Indian citizenship via an Overseas Citizenship of India (OCI) status.

This means that the Queens Park Rangers owner has been granted the same rights by the Indian government as a non-resident Indian (NRI) in terms of shareholding in an airline.

Fernandes' OCI approval, however, was given amidst concerns raised over foreign control in AirAsia India and Vistara (a Singapore Airlines and Tata Sons joint-venture), by the Federation of Indian Airlines – an association of four carriers: Jet Airways, Go Air, IndiGo and SpiceJet.

They dispute that under the country’s civil aviation policy, majority ownership of an Indian-based airline needs to be held by an Indian citizen.

However, further regulations state that NRIs are allowed to hold 100% of an Indian carrier's shares.

Fernandes controls about 32.4% of AirAsia Berhad with partner Kamarudin Meranun, which in turn holds 49% of AirAsia India. The rest is held by Tata Sons and two board members.

In a previous interview with Flightglobal, Fernandes described AirAsia's smallest affiliate as an “unmitigated success (and) opening the floodgates” for its Malaysia and Thailand units to begin tapping the India market.

Still, the group plans to grow its Indian fleet to 20 aircraft from the current six. Flightglobal’s Fleets Analyzer shows that overall the AirAsia Group operates 167 Airbus 320ceos. As for its orderbook, it has 303 A320neos set for delivery between now and 2028.

AirAsia conducts its orders for its affiliates on the group level.

“(AirAsia India) is moving along nicely. Aviation is a gestation project. It’s not something you can just go in there today and make millions of dollars tomorrow,” Fernandes added.

Nowhere is this go-slow approach more in evidence than with AirAsia India.