Though the hijacking of an EgyptAir Airbus A320 on 29 March appears not to have been a terrorism-related incident, it can only intensify concerns about Egyptian airport security – five months after the MetroJet A321 crash – and the challenges in rebuilding the North African nation's reputation as a tourist destination.

Airlines have sharply reduced capacity and suspended services to Egypt in response to the Russian A321's suspected bombing shortly after take-off from Sharm el-Sheikh on 31 October 2015.

This came after last year's high-profile terror attacks on tourism targets in Tunisia had already hit wider North African travel demand. With many of these travel restrictions still in place, Egypt enters its key summer season with significant challenges.

At the ITB travel fair in Berlin on 10 March, Egypt's tourism minister Hisham Zaazou highlighted the central role the industry played in the national economy. Tourism, he says, generates 11.5% of Egypt's GDP and directly employs around four million. When several countries – including Germany, Russia, the UK and USA – implemented travel restrictions after the crash, it was "like closing the tap overnight", adds Zaazou.

Flightglobal's Innovata schedules show that airline seats to and from Egypt in April 2016 are down nearly 6% on the same month last year, while the number of flights has been reduced by 3.7%.

That has largely impacted capacity to key tourism points in the country. Innovata data shows that seat capacity has tumbled at tourist hotspots: down 45% at Sharm el-Sheikh – where travel restrictions have focused on the airport area itself – and 35% at Hurghada compared with April last year. By contrast, seat capacity is up over 6% at Cairo airport, where demand is broader than pure tourism and which is largely served by network carriers.

Capacity developments are not uniform across regions. Whereas capacity between Egypt and the Middle East – the largest segment – has actually been increased, the numbers of seats in the next two largest segments – Europe and Africa – have fallen by a nearly a third and 27%, respectively.

The European figure reflects a 13.6% reduction in seats from and to Germany and a halving of UK carriers' Egyptian capacity. Russian airlines meanwhile suspended flights to Egypt altogether as a result of restrictions imposed by Moscow. Capacity from Turkey – another country that has generated a high volume of traffic to Egypt – has been trimmed 12.6%.

Much of this has been driven by cuts from European leisure and low-cost sector operators, reflecting their stronger focus on tourism destinations – notably Sharm el-Sheikh.

Air Berlin, however, has cut its number of flights by a similar proportion, with reductions at almost all German airports, though Leipzig is an exception.

Lufthansa's leisure joint venture with Turkish Airlines, SunExpress, insists that it "stands by Egypt as a destination" as the country is a "touristic jewel", but schedules data reveals that the carrier suspended flights to Egypt from seven German airports and halved services from its Frankfurt base. To what it terms "popular destinations" such as Bulgaria, Greece and Spain, SunExpress intends to add routes and increase capacity.

Germania has reduced its overall capacity to Egypt too, suspending services from airports such as Frankfurt, Friedrichshafen and Paderborn.

However, the picture is not the same across all German carriers. Hannover-based TUIfly has significantly grown its number of flights to Egypt and introduced services from additional airports, such as Karlsruhe and Nuremberg. 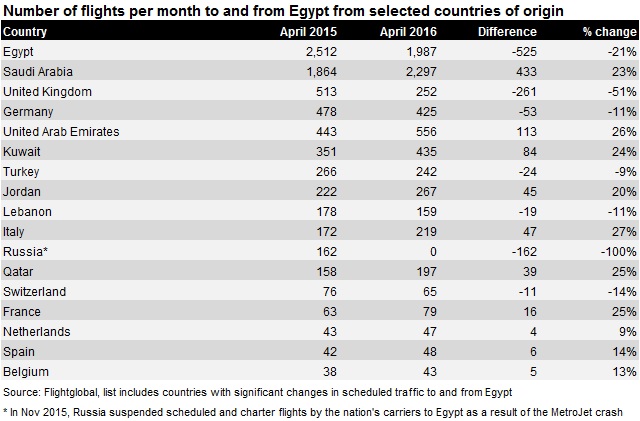 The UK's Monarch Airlines, meanwhile, has scaled down Egyptian services by 29%. The Luton-based carrier flies to Hurghada, but has extended a suspension of Sharm el-Sheikh flights until 30 October. These will be resumed "when there is a change in travel advice from the UK government and hopes to resume services from the beginning of the winter season", says the airline.

The UK Foreign and Commonwealth Office's website says its advice to avoid "all but essential travel" excludes several tourist resorts – including Hurghada and Sharm el-Sheikh – but does cover air travel to the latter resort's airport.

TUI's UK subsidiary Thomson Airways has slashed two-thirds of its capacity to Egypt. While the airline's schedule spanned 161 flights from 14 UK airports in April 2015, its timetable for the same month this year comprises only 55 flights spread across Birmingham, Bristol, London Gatwick and Manchester.

Low-cost giant EasyJet used to serve Sharm el-Sheikh from Gatwick, Luton, Manchester and Stansted, but these routes have been suspended since November 2015. It does though operate twice-weekly flights to Hurghada from Gatwick. 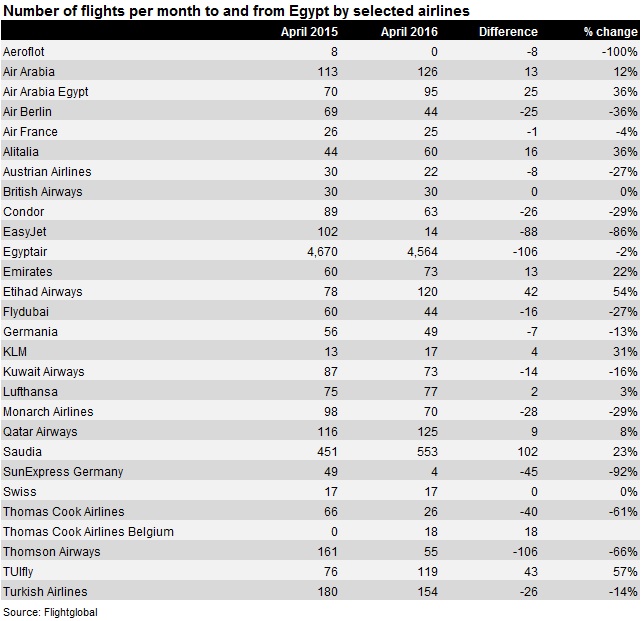 In a bid to encourage airlines in general to raise capacity again, Egypt's government has made plans to implement a financial support scheme for the winter 2016/2017 schedule, says Zaazou.

The country has historically supported tour operators, he notes. But as holidaymakers increasingly book flights directly with airlines – rather than through tour packages – support for carriers is central to restoring tourist traffic, Zaazou asserts.

Incentives will be calculated on a seat rather than passenger basis in order to guarantee support even if load factors are low.

The core problem is "a perception that our airports are not safe and secure", Zaazou argued at ITB. But this is a "wrong perception", he contends.

Egypt's government has set up a special committee to improve airport security with support from UK-headquartered consultancy Control Risks and advisers from international airport operators.

Zaazou says the initiative is about introducing "additional" measures to existing "good" safety and security standards.