The International Space Station marked the end of an era on Tuesday, 12 August 2014 with a “flawless” arrival by the fifth and final resupply flight in ESA’s Automated Transfer Vehicle programme.

ATV-5 – named after Belgian priest and physicist Georges Lemaître, who formulated the Big Bang theory of the creation of the Universe – docked with the ISS at exactly 1330GMT, packed with 6,602kg (14,600lb) of fuel, water, gas and dry cargo. The spacecraft will remain docked to Russia’s Zvezda module of the ISS for six months, while it is unloaded and eventually packed with rubbish before being cut loose to burn up in the atmosphere during a destructive re-entry.

Meanwhile, from 14 August, ATV-5’s thrusters will perform a series of reboost manoeuvres to maintain the station’s altitude. Orbiting at only around 450km (280 miles), the ISS passes through enough residual atmosphere to slow it down slightly, so it would eventually fall out of orbit without boosts from visiting supply ships. 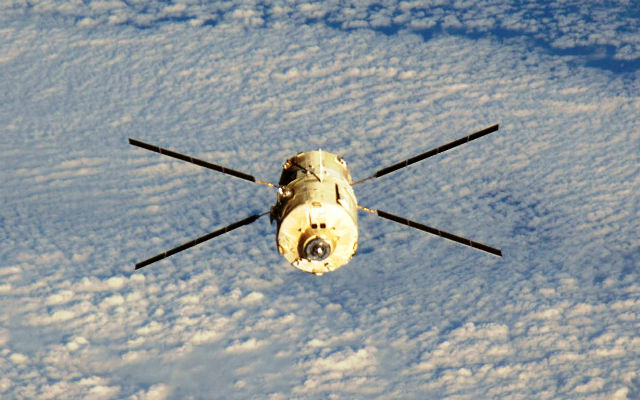 But apart from its being far and away the biggest-payload craft flying since the US Space Shuttle fleet was retired in 2011, the significance of ATV – well demonstrated by the Georges Lemaître mission (pictured as seen from the ISS en route to rendezvous) – is the precision of its fully-automated flight. Where other supply craft need to be grabbed by the station’s robotic arm and guided to their docking port, ATV arrivals are fully autonomous. Following its 29 July launch from Europe’s spaceport at Kourou, French Guiana, as the heaviest-ever Ariane 5 payload (20,275kg), ATV-5 made its way to a point some 40km behind and slightly below the ISS, then over several hours used GPS signals to make automated manoeuvres through a series of waypoints.

“For the final 250m [820ft], ATV navigated using a ‘videometer’ and ‘telegoniometer’, which uses laser pulses to calculate the distance and orientation to the station,” says Jean-Michel Bois, leading the ESA operations team at the ATV Control Centre in Toulouse. ESA described the process, monitored on the ground and by German astronaut Alexander Gerst and cosmonaut Sasha Skvortsov on the station, as “completely flawless”.

When it arrived last year, ATV-4 came into the docking port just 11cm off the centre line “without even touching the surrounding docking cone used to guide less precise spacecraft”, according to ESA.

That precision will live on as the service module for NASA’s Orion crew capsule. ATV prime contractor Airbus Defence & Space is adapting the cargo vessel to provide propulsion, power supply and life support for missions to the Moon and asteroids – or even Mars from around 2035, if current NASA planning holds. Orion and its service module are scheduled for an unmanned maiden flight in 2017 to one of the Lagrange points – a position in orbit where the Earth and Moon’s gravity balance out, allowing a spacecraft to hold station easily. A second, manned flight could follow in 2021 or 2022.

ATV’s thrusters could also support a proposed ESA automated Moon landing mission. Tests carried out in 2012 to simulate a lunar descent and touchdown in a vacuum convinced ESA that the ATV thruster could be used to control a lander’s descent. The landing would take about 1.5h from a 100km lunar orbit, with an extremely challenging final 10min; in the lunar vacuum, all braking is carried out by rocket power, which means a huge fuel burn.

So, thrust must be adjustable to account for a tremendous change in the lander's mass as it approaches the Moon, as a rocket powerful enough to slow the craft's early descent would be powerful enough to cause it to "bounce back" off the surface. ESA’s concept calls for a cluster of ATV thrusters, to allow precise control by turning individual units on or off.

The ATV programme, which first flew in 2008, has been an important aspect of Europe’s broad political ambition of maintaining independent space access capability, and also underpins ESA’s financial contribution to the ISS, under what amounts to a barter system between ISS partners that, collectively, has built and maintains the orbiting outpost. That barter contribution continues with the Orion participation.

Post-ATV, the ISS will be supplied by five other unmanned ships: Russia’s venerable Progress, Japan’s HTV and the US Dragon (SpaceX) and Cygnus (Orbital Sciences) craft. None match the capacity or reboost power of ATV, but the Dragon capsule can return equipment safely to Earth and is being adapted to transport crew. The others are, like ATV, destroyed during re-entry.