When Jat Airways was rebranded Air Serbia late last year, it marked the symbolic end of the concept of a pan-western Balkan national carrier – but who, if anyone, will ultimately replace it as the dominant player in the Balkan aviation market remains an open question.

In the years following the break-up of Yugoslavia, its successor states formed their own airlines – Croatia Airlines, Montenegro Airlines, B&H Airlines – to reflect their national aspirations, and air services fragmented.

Today, the national carrier model put in place since 1990 has come under serious threat. Flag carriers are struggling with mounting losses and debts, demand is low and conditions have worsened following the global financial crisis, with the result that almost all of them are up for sale.

Loss-making Slovenian national carrier Adria Airways is on the market, as is Croatia Airlines, Romania’s Tarom and B&H Airlines. Most recently, Montenegro Airlines joined the list. 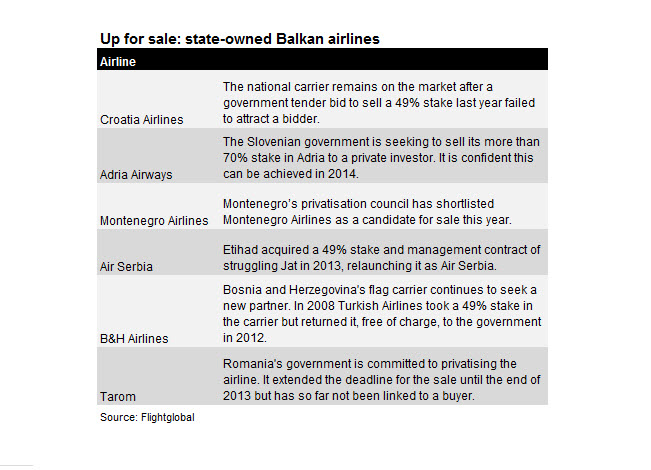 As Balkans-based airlines have struggled so connectivity to and within the region has also suffered. Jat once boasted a network connecting it to North America, Europe and Asia, but its successors have replaced this with links primarily to leisure and visiting friends and relatives markets such as Germany, Italy and France. 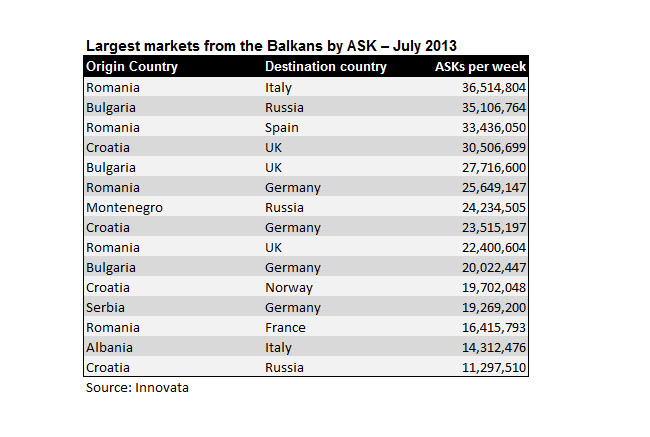 But Croatia Airlines chief executive Kresimir Kucko says that while conditions facing the region’s airlines are challenging, a comparison with Jat’s heyday is just not accurate.

“If you are referring to the former Yugoslavian times, then yes, there were [many more regional routes], but those were different times – you can’t compare them. Everything was nice and easy back then, but when you need to achieve positive results and be more efficient, it is a different story.

He says it must be borne in mind that road and rail links between the former Yugoslav countries have improved markedly since 1990 – reducing the need for so many air services.

The loss of connectivity is expected to continue and deepen as the airline sector in the region contracts and consolidates further, warns Andreas Kraus, associate partner for Europe at Lufthansa Consulting.

“I expect to see a further consolidation in the western Balkans airline sector. Due to the fragmentation into small aviation markets, no leading carrier has developed in that region and a multinational approach still struggles with the region’s cultural diversity.

“Given the intensified pressure on the current airline business models, some privatisation attempts continue to have a certain ‘grasping at straws’ character.”

Kraus believes that governments in the region are struggling to privatise their airlines because they are not models that appear attractive to investors.

“I expect that their attractiveness to margin-oriented investors will be limited. In some cases, it might have been the better strategy to replace a legacy national carrier by a new airline model emerging from the market’s strengths, particularly the tourism potential of the region. But obviously the forces to maintain old structures were powerful.”

One exception to that rule has been Air Serbia. Through its partnership with Etihad, the Belgrade-based carrier is overhauling its fleet to include new Airbus A320-family aircraft, and will be supported with traffic feed from new allies in Europe such as Darwin Airline and Air Berlin.

Apart from Montenegro Airlines’ short-lived partnership with Turkish Airlines a few years ago, Air Serbia represents the first airline in the region to be able to call in a strong backer giving it the potential to take a dominant role in the market.

“With the new fleet, the new branding and product approach plus the enhanced network, Air Serbia has made a great step to become an important player in the region. However, it remains to be seen how far Air Serbia can develop its current network and introduce new and profitable routes under the partnership of Etihad,” says Panagiotis Poligenis, associate partner for the southeast Mediterranean region at Lufthansa Consulting.

Croatia’s Kucko says that for the time being the impact of Air Serbia on his operations is “limited”, adding that the two airlines are in fact co-operating where possible, with Croatia providing training on A320 maintenance to Air Serbia technical staff.

So, how can we expect the market to develop in the future? Further informal co-operation between Balkan airlines is a possibility, although these have been attempted and failed in the past. Large carrier groups such as Lufthansa have enough of their own problems to help fellow Star Alliance partners Croatia Airlines and Adria.

Unless Air Serbia does come to dominate, the regional players still seem to have time and room to reform their businesses and become more competitive. Interestingly, the low-cost airlines have not yet made a major impact in several Balkan markets.

Innovata schedules show that in Slovenia, for example, at the height of the last summer season in July, Adria Airways held a 71% seat capacity and 61% of ASKs. EasyJet accounted for just 6.8% of seats and 8.4% of ASKs. In Macedonia, which lacks a national carrier, Wizz Air has become the dominant player, but the picture overall is mixed.

Lufthansa Consulting’s Kraus believes this reticence on the part of low-cost carriers is down to the challenging combination of “strong seasonality and high price sensitivity”.

He adds: “It seems that other European markets still offer more attractive yields for the low-cost airlines. Not bound to this region, they are free to pick the cherries of selected city pairs and focus on the summer peak season only.”

It’s a trend that others also note. The combination of the warm Dalmatian coast during the summer and historic cities such as Dubrovnik means that during the summer, southern Croatia becomes an attractive tourism destination.

The demise of Dubrovnik Air has led new Croat airlines Trade Air, Adriatic Skyways and Libertas Air – which is due to start operations in 2015 – to base themselves at Dubrovnik airport to serve this market.

Crucially, they are working very closely with tour operators and see themselves as a means of transport for hotels rather than as airlines. Adriatic Skyways doesn’t even have a fleet or AOC, relying instead on Denim Air to do the actual flying.

Several airlines are in the midst of seemingly successful restructuring, such as Croatia Airlines, which expects to report a full-year profit for 2013.

Finally, as more Balkan states enter the EU, the pressure to reform and turn away from state subsidies should encourage regional operators to become more competitive.