This was Boeing's problem: a new version of the 777 with a new engine and a composite wing will enter service in 2020, but the older version with a metallic wing will likely stay in production as a freighter for at least another five years. So how does the company eventually assemble both types down a single bay of the sprawling factory complex in Everett, Washington, while maintaining a brisk, 8.3-aircraft monthly production rate?

A very similar problem – albeit involving a much slower pace of production – came up a decade ago as the re-winged and re-engined 747-8 entered production alongside the last 747-400s. Boeing's attempt then to assemble both types in the same factory at the same time ended in failure.

Avoiding a repeat of that awkward chapter is clearly on the mind of the 777 programme's executives. They also face the added pressure of being entrusted with one of Boeing's most successful franchises – and one the manufacturer is counting on to seamlessly transition to the improved 777X family over the next five years.

In the approach to the 20th anniversary of the original 777's entry into service on 7 June, Boeing has also unveiled a plan to fundamentally redesign the aircraft's production system to accommodate the assembly of newer and larger aircraft types while not sacrificing quality or output.

"We will really be transforming the production system over the next two to three years to a monument-free environment," says Elizabeth Lund, Boeing's 777 vice-president and general manager. 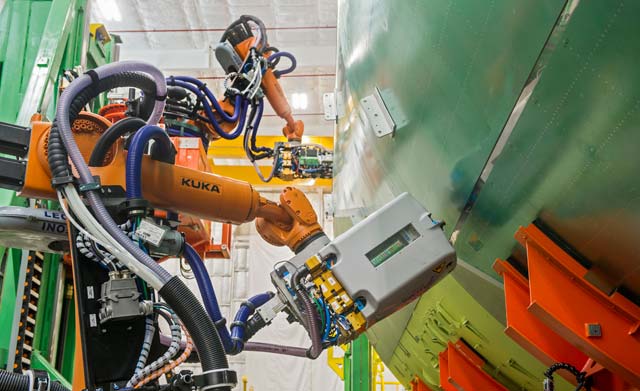 This new iteration will represent at least the third major evolution of 777 production since the type was introduced two decades ago. The original method had 777s parked in slant positions with large tooling platforms erected around the aircraft during assembly. As production capacity increased from seven to more than eight per month, the slant positions were replaced by a moving line with large tooling systems still required for the wing-to-body join position.

Large, immobile tooling jigs will be eliminated in the new factory. Major fuselage sections and wing assemblies will instead be "cradled" in highly automated tools, which will be advanced down the line on automated guide vehicles. Boeing's inspiration is the highly automated automotive industry.

"It's automation, but it's more than automation," Lund says. "It's also the thought that we will be designing for a more producible airplane, much like in automotive. It means we will be transforming the way we deliver parts and tools. And we will be really streamlining that entire production system so that it really flows."

The key piece in this new model for commercial aircraft manufacturing has already been introduced. The fuselage automated upright build (FAUB) system may not have a catchy name, but it addresses the key issue that has kept aircraft factories in the pre-automated, manual era. Unlike automobiles, aircraft are assembled with fasteners. In the case of the 777, hundreds of thousands of fasteners are required. Each fastener requires a two-person team: a riveter to guide the fastener into a pre-drilled hole and a bucker on the other side to apply pressure and compress the fastener into place.

The major fuselage sections for the 777 measure several metres in length. To automate the riveting and bucking process, Boeing needed to develop a robotic system that can operate in pairs along the length of the fuselage. The FAUB is Boeing's solution to that problem. The manufacturer partnered with robotic systems expert Kuka, which developed the riveting and bucking equipment. Boeing then refined how they work during a year-long series of testing at a rented facility in Anacortes, a small town along Puget Sound north of Everett.

Kuka "really reduced the learning curve", says Jason Clark, Boeing's vice-president for 777 and 777X manufacturing. "It would have taken us a decade-plus to develop this on our own. It's an extremely important relationship that we've built."

A FAUB-manufactured, representative 777X fuselage section is undergoing fatigue tests that will simulate 60,000 cycles, or three times a normal operational life. The results will be available in August, which should allow Boeing to proceed with using the FAUB in regular production beginning later this year, Clark says.

The new automated production systems are expected to dramatically boost production. Boeing estimates that the FAUB will increase productivity by 50% initially, and then improve over time. But company officials are being careful not to disturb the existing manual and automated processes. In fact, Boeing is building a new 350,000ft² (32,500m²) assembly bay – dubbed 40-27 – to introduce automated systems. As the robotic alternative is validated, it is then migrated into the regular 777 assembly bay.

"One of our key tenets is never to risk the production system that we're so proud of," Clark says. "To be able to protect that line, we've created another facility in parallel with the existing production line. That allows us to slowly ramp up on the technology and never put that assembly line at risk." 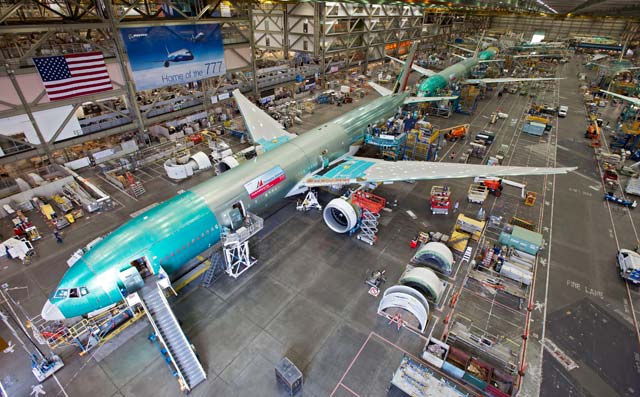 Automation is being applied in another key area for the 777 and 777X programmes. The 777X empennage – a pair of horizontal and one vertical stabiliser – will be about 1.27m (50in) longer than the original 777, but both types will be drilled using the same automated system, eliminating about 58,000 manual drills on each shipset, Clark says.

"When we designed the automated system, we didn't know the 777X would have a bigger horizontal and vertical [surface]," Lund says. "But the [automated] line can accommodate that. You don’t have to re-tool. That's kind of the 'A-ha' we’re trying to give you. This approach and philosophy can adapt to that."

There are still limits to automated drilling and fastening on the future 777 line. Each of the major structural join positions must continue to be assembled manually.

"But we're working on trade studies right now: how do you automate that part of the assembly," Clark says. "We're still not there."

No trade study, however, will overcome one area of the 777 production system that can never be reconciled. The 777X replaces the original metallic wing with a composite structure. Boeing plans to keep producing 777 Freighters for several years after the 777-9X enters service. That means Boeing will maintain separate assembly lines for the metallic 777F wing and the composite 777X wing.

"The wing is a different story. It has its own production line," Clark says. The 777X wing will have a "whole different assembly method with new robotic technology that does that drill and fill on carbonfibre. We'll continue to invest in the aluminium wing line. It is one portion of the lines that will twilight over time as a new [777X] freighter comes into view." 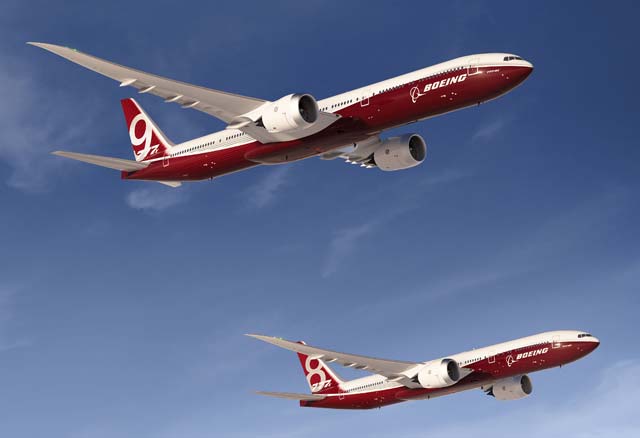 By re-engining and re-winging the 777 rather than replacing the aircraft with a clean-sheet, Boeing gave itself another two decades to improve on a familiar production system. The company is not starting largely from scratch as it did on the new design for the 787. That makes the 777 an easy candidate to automate a set of well-understood tasks for assembling a metallic fuselage, while leveraging the 787 experience on the carbonfibre wing. It also underscores Boeing's commitment to moving beyond manual labour for future assembly work.

"When you do a robotic system, that robot doesn't care [about the monotony of the task]," Clark says. "Its shoulders don't hurt. Its back doesn't hurt. It didn't just come back from lunch and is kind of drowsy. It does the same every single time. Once you have it dialled in, it just repeats itself over and over and over again."