China’s political and aerospace leadership is painfully aware that its airpower ambitions are severely impeded by the lack of what it calls a “Chinese heart” – modern, indigenous aircraft engines.

Indeed, it has taken nearly 30 years of development for China’s first fourth-generation turbofan – the Shenyang-Liming WS-10A Taihang – to achieve a useful level of production; unofficially estimated at greater than 300 units.

To rectify this crisis, China may be ready to spend $300 billion over the next 20 years on its engine sector, according to Shanghai’s Galleon Consulting. The group’s annual China Aerospace Propulsion Technology Summit, conducted in co-operation with China’s government and engine industry, offers a rare keyhole to help understand the status of China’s military aircraft engine sector.

Can China meet what could become a steep demand for thousands of new turbofans for future fighter, bomber, transport, support, trainer and unmanned air vehicle programmes?

An August 2014 National Defense University of the People’s Liberation Army (PLA) report on “civil-military integration” called for the production of 400 Xian Aircraft Corporation (XAC) Y-20 four-engined transports. Though only a policy suggestion, this number of aircraft could require up to 2,400 high bypass turbofans, assuming reported PLA practice of acquiring a 50% reserve of engines.

The People’s Liberation Army Air Force (PLAAF) may grow by 544 combat aircraft by 2020, according to the early 2014 estimate of an Asian government, affirming demand for advanced turbofans. In addition, the lack of indigenous engines limits foreign sales of China’s aircraft.

“Break the airpower bottleneck, revitalise the aero engine industry,” was a Chinese exhortation slogan that appeared in March, at the time of the annual National People’s Consultative Congress.

Such a structure was suited to Mao Zedong’s “People’s War” strategies of a long war to repel a Soviet invasion. More recently, it has been encouraged by 1998 PLA logistics reforms promoting greater competition among defence concerns. But it has prevented China from creating modern integrated corporations capable of sustained investments to produce constant technology breakthroughs necessary for better engines. 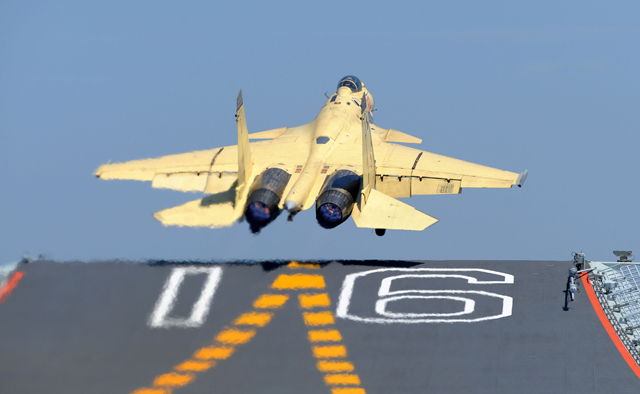 But reports from late 2014 and April 2015 note that AVIC lost and the Communist Party and perhaps the PLA leadership decided that a new engine concern had to be carved out of AVIC. The organisation or its leader has not been revealed officially. But it is interesting that current AVIC chairman Lin Zuo Ming told China’s Excellence magazine in March: “GE [General Electric] is my teacher.”

One reality for China is that such a new engine concern will still require foreign “partnerships” to keep abreast of rapidly advancing technology to ensure commercial viability. But given the party’s and PLA’s longstanding strategic policy of civil-military integration, few foreign companies are going to sell or surrender technology, especially if they can sustain highly lucrative engine sales.

According to a 30 April press release on its 30 years of business with China, CFM International stated that China has ordered 3,900 CFM56 and Leap turbofans to power 1,950 Boeing, Airbus and Comac airliners. Obtaining its first CFM56 engines in October 1985 soon allowed Shenyang Liming-Aero Engine to assess its turbofan core technology, which heavily influenced the core it developed for its WS-10A military turbofan.

Dependence on Russian military engines has also been profound. Some Chinese estimates hold that China has imported 1,000 to 1,200 of the Russia-based, NPO Saturn AL-31F 12.5t thrust military turbofans. At the 2009 Dubai air show, Salyut officials said this number was about 1,000. They power Sukhoi Su-27s and Su-30MKK/MKK2s purchased from Russia, as well as the SAC J-11A, early J-11Bs and early J-15 carrier-based fighters.

Both China and Russia want to nurture this “resource”. Seeking independence, in July 2010 Chinese state television profiled Plant 5719, which had managed “independently” to extend AL-31F service life from 900h to 1,500h. Help from Ukraine was likely involved.

Also at the Dubai show in 2009, Salyut officials said China was interested in their upgraded 13.5t-thrust AL-31F-M1 turbofans. This may power the J-10B in the absence of a Chinese alternative. But China’s reported key interest in purchasing the Su-35 fighter is to obtain a large number of its 14.5t-thrust and thrust-vector controlled (TVC) NPO Saturn 117S engines.

In 2010 there were reports that China would co-produce 250 of the 4.2t-thrust Ukrainian Ivchenko-Progress AI-222-25F turbofan to support Hongdu Aircraft’s L-15 trainer programme. Data from Galleon Consulting indicates production started in 2013 at the AVIC South Aviation Industry Group, which mainly makes turboprop and turboshaft engines, but this has not been confirmed.

Perhaps China’s most successful turbofan co-production programme is for the 9.2t-thrust Rolls-Royce Spey Mk202. Having obtained an initial batch of 50 in 1975, China balked at the cost of co-production and spent the next 20 years trying to copy it. But by 1998 Beijing was willing to pay for 80-90 more used Speys and for the knowledge to start co-production at Xian Aero-Engine, where it is called the WS-9 Qinling. China required the WS-9 to power the Xian JH-7 and JH-7A strike fighter programme, which an Asian government expects to total 320 aircraft by 2020, conceivably requiring 960 engines. There are reports of an upgraded 9.9t-thrust WS-9A.

Due to pervasive secrecy, the critical importance of the WS-10A Taihang to China’s airpower ambitions is not reflected by the amount of official open information on the programme. But after three decades of development, cursory but plausible historical data emerged in early May on Chinese web portals Sina.com and Sohu.com.

Perhaps the only known brochure for the Taihang, issued around 2002, states: “Fighter engine, bomber engine, transport engine, marine gas turbine and industrial gas turbine will be derived from the Taihang engine”. This follows from the decision of the 606 Institute, or AVIC Shenyang Engine Design and Research Institute, to emulate GE’s use of core of its F101 turbofan to develop a family of engines.

The Taihang programme gained government approval in 1985 or 1986, following the unsuccessful WS-6, an intended 12.5t-thrust turbofan for the unrealised SAC J-9 fighter. Taihang was originally slated for the CAC J-10, but delays forced adaptation of the NPO Saturn AL-31FN before it began flight testing in 2002. A Shenyang brochure issued at the 2002 Zhuhai air show showed one Taihang fitted to an Su-27 test bed, reportedly called the J-11WS.

Taihang’s development over the last decade was slow, with repeated failures delaying certification until December 2005. Though planned for 2003, the first twin-Taihang powered J-11 did not fly until 2007. 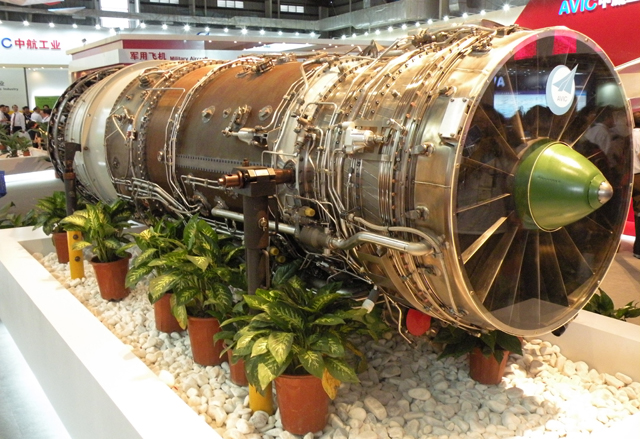 Early production engines suffered “quality” issues related to insufficient materials and early direct use of control systems from an AL-31F, among others. There were a number of in-flight failures, and better production versions may not have emerged until 2009. Expansion of its flight envelope to include manoeuvres greater than 8g reportedly may not have occurred until 2013.

The Taihang reportedly will soon power eight PLAAF regiments of J-11B and twin seat J-11BS, which could require over 400 engines. It is used by the new J-16 twin-seat strike fighter, 100 of which are expected by 2020. It is also beginning to appear on the J-15 carrier fighter, for which it reportedly has been modified for maritime use and may have the designation WS-10H.

In early May, it was revealed that the electronically-scanned array radar-equipped J-11D had made its first flight. At the same time, there were unconfirmed reports it featured a new variant of the Taihang, with improved reliability and thrust approaching that of the AL-31F-M1; or more than 13t. At its display at the 2014 Zhuhai air show, Taihang was credited with a thrust of “12,000kg to 14,000kg-force”.

Success of this new variant is apparently due in part to the incorporation of new single-crystal turbine blades and a new full authority digital engine control (FADEC) system, touted in Chinese state press reports in April and May. Apparently, due to Salyut’s refusal to sell source codes to their system, China likely spent close to 20 years developing its own. An early system flew on a SAC J-8II fighter in 2002, but a more developed version was revealed at the 2012 Zhuhai air show.

At least one Taihang has been tested on a CAC J-10B, but it is not clear if or when it will be adopted for production. An uprated Taihang may also support early production of the J-20, pending completion of its WS-15 turbofan.

A programme that apparently dates back to the early 1990s, the 15t-thrust WS-15 is most likely a product of the AVIC Shenyang Engine Design and Research Institute, co-operating with the AVIC Xian Aero-Engine Group as its manufacturer. Previously it has been described as an AVIC Chengdu Aero-Engine programme, likely because it is the anticipated powerplant for the J-20.

A third turbofan critical to China’s airpower ambitions is the medium, 8- to 9t-thrust WS-13 Taishan. Probably under development since the early 1990s at the Guizhou Liyang Aero-Engine Group, its success will in turn determine the success of the CAC FC-1/JF-17 export fighter, which currently requires Russian approval for the export of its current Klimov RD-93 powerplant. The WS-13 will also determine the success of SAC’s FC-31 export fighter programme.

Reportedly based on Klimov’s RD-33 turbofan, it has apparently suffered development delays due to challenges similar to Taihang’s difficulties in having to master foreign technology before being able to develop a new engine.

But in a 2008 advertisement issued at the Zhuhai show, the AVIC Chengdu Gas Turbine Research Institute revealed a design for a new 9.5t-thrust turbofan with an apparent TVC. This turbofan was also displayed in model form at the 2008 show. This could also be the WS-13, as Chengdu and Guizhou co-operate on other projects.

According to reports, an early test model apparently flew for a brief period on an FC-1 starting in 2010. Despite repeated inquiries, Chinese officials have been coy about the WS-13. However, a late December 2014 report of activity on the Shanghai Stock Exchange noted that Guizhou Liyang Aero-Engine was raising funds for a “middle-thrust aero-engine production line construction project”.

An uprated version of the 4- to 5t-thrust Minshan turbofan could become a potential competitor to the WS-13. A product of the Shenyang Liming Aero-Engine Group, it was first revealed at the 2012 Zhuhai air show as a powerplant for trainers, light fighters or UAVs. While its model looks impressive, there is no open information that it has flown.

While China has engaged in some limited revelation and marketing of two high bypass turbofans under development for commercial application, less has been revealed about two mainly military application turbofans.

Information from Galleon Consulting indicates that the 13t-thrust SF-A from Shenyang-Xian and the 13t-thrust CJ-1000A from the new AVIC Commercial Aircraft Engine Corporation could power commercial aircraft like the Comac C919 or the XAC Y-20 military transport. Models started appearing at Chinese exhibitions in 2009 and 2011, respectively for the SF-A and the CJ-1000A. While Galleon expects both to begin production in 2016, there is no other open data indicating their level of development or testing.

One prominent military programme is the WS-20, or WS-118; a 12- to 13t-thrust high bypass turbofan programme of the Shenyang group. It is derived from the core of the WS-10A. Images started appearing on Chinese web pages in 2013 showing a test engine on an Il-76 testbed. A higher thrust version is necessary in order to enable the Y-20 to meet its expected cargo capacity of 66t. While Galleon expects production to have started in 2015, it is not clear when it will enter service.

The Chengdu Aero-Engine Group may be making some progress with the 12t-thrust WS-18A. Apparently derived from the D-30-KP2, this turbofan may be a candidate for the Y-20 and the H-6K. While Galleon notes that production could have started in 2009, other sources indicate flight testing may have only begun last year.