When NASA chose seven-seat capsule concepts from Boeing and SpaceX for full development funding in 2015 – in its bid to restore a US manned spaceflight capability lost with the 2011 retirement of the Space Shuttle fleet – it looked like the end of the runway for the Dream Chaser, an alternative concept best described as a mini Shuttle. The prospects turned worse when Sierra Nevada Corporation (SNC) lost a court bid to force NASA to change its mind.

Now, Boeing and SpaceX are spending $6.8 billion from NASA’s so-called Commercial Crew Transportation Capability (CCtCap) programme to prepare for astronaut launches to the International Space Station from Cape Canaveral from 2017. But a determined SNC chose to blaze its own trail – which the company insists will end in space, with or without NASA’s blessing.

First off, SNC is pitching an uncrewed variant of its reusable, runway-landing Dream Chaser vehicle at a NASA contract to resupply the ISS from 2018 to 2024. The company also sees international opportunities, such as partnering with Europe or Japan. The Dream Chaser may, of course, turn into expensive wishful thinking, but SNC’s Space Systems corporate vice president, Mark Sirangelo, is confident that a series of flight tests set to begin in early 2016 will prove that this concept for a follow-on to the shuttle is no idle musing.

“In the last year, we were not part of the [commercial] crew downselect, and a lot of people thought that would be the end of the programme,” he told the International Symposium for Personal and Commercial Spaceflight in Las Cruces, New Mexico on 7 October. “We’re a pretty resilient team. We don’t like giving up.”

He emphasised that SNC will press on with the Dream Chaser, even if it doesn’t secure the next NASA cargo contract:

“What’s different now from a few years ago is we have real vehicles and we’re well into development. The vehicle is highly mature… so the idea of taking it and moving it to the next level should we not win the cargo programme, is much more viable than it ever was, even in the last year.

“People thought perhaps we couldn’t do this when we weren’t selected for the commercial crew programme, but in fact we’ve moved faster and developed a whole second variant to the vehicle in that time. It was never designed to be a NASA-only project.”

SNC’s determination to press ahead would appear to be much more than fighting talk from Sirangelo and, if nothing else, the company is putting a lot of its money where his mouth is. As of October 2013, when a one-minute glide from 12,500ft by a full-size aerodynamic model proved the airworthiness of the lifting-body craft (and, apparently, its autonomous flight and landing avionics), the then-nine-year-old Dream Chaser project had consumed around $300 million of NASA money, and what Sirangelo at the time described as a similar amount put in by Sierra Nevada’s investors.

This month, the privately held company declined a Flightglobal request to detail programme finances, but simply says: “The second free-flight test [in 2016] will be conducted as part of a NASA milestone which, upon successful completion, will be funded by NASA. In addition, SNC has made significant financial contributions to the programme.”

Failing to make NASA’s CCtCap cut was piling insult on to, quite literally, injury. Though declared a success in terms of data gathering, that first free-flight test in October 2013 ended with a runway crash at Edwards Air Force Base in southern California when one leg of the landing gear failed to deploy. To get to where it can talk about resuming flight tests, SNC had to rebuild the vehicle. The Louisville, Colorado-based programme has also endured staff lay-offs.

SNC has been exploring opportunities outside of the US. Collaboration has been discussed with Germany’s DLR aerospace agency and the European Space Agency, which has active spaceplane development programmes as part of a medium-term plan to gain the ability to bring material home from space. SNC has also been courting Japan’s JAXA space exploration agency.

But the most lucrative and immediate opportunity is NASA’s 2018 to 2024 ISS cargo resupply contract. An award announcement for two service providers is due on 5 November 2015 and SNC is competing with a Dream Chaser-based cargo system in what appears to be a four-way contest. This involves incumbents SpaceX and Orbital ATK, offering improved versions of their now-flying Dragon and Cygnus systems, and Boeing – which has proposed a cargo-carrying derivative of the CST-100 spacecraft it is developing for the CCtCap crew programme. 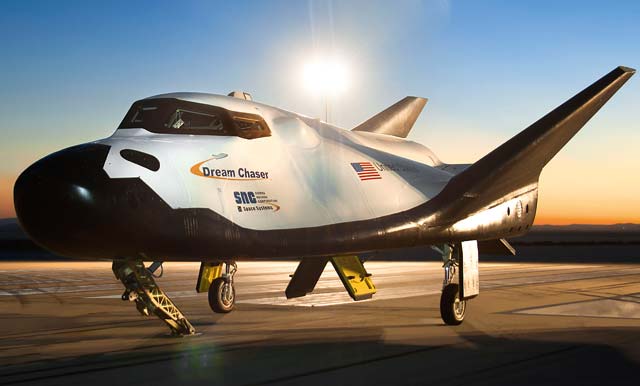 The craft could land on runways around the world, offering swift transition of time-sensitive cargo

The Dream Chaser – which is based on NASA’s HL-20 lifting body concept from the 1980s – has morphed significantly over the course of development, but the most significant changes have come in the past year in response to NASA’s resupply programme. The latest design, announced earlier in 2015, has folding wings and a solar-powered cargo attachment for the resupply mission.

The change should lower the launch cost considerably, since the spacecraft now fits inside the standard payload fairing of United Launch Alliance’s Atlas V and Delta IV rockets, or its in-development Vulcan. The possibility of launch on top of Arianespace’s Ariane 5 is also thought to have been explored: the original design would have seen the Dream Chaser attached externally on a specialised adaptor.

Sirangelo says the cargo variant is capable of delivering 5,000kg to and from the space station, and could also be used as an additional space station module or to host science experiments. As for reusability: "The turnaround of the vehicle is expected to be about 30 days. It will be refurbished in Florida and then launched back up at the same location.”

He also stresses its flexibility, noting particularly that the absence of any toxic materials in the craft's construction means many landing places around the world could host Dream Chaser, and adds : “We can offload immediately after the vehicle stops. Anything that’s critical can get the shortest amount of time from the space station to wherever it needs to go."

SNC said if the Dream Chaser secures the NASA resupply contract, it could begin ferrying cargo by late 2018 or early 2019.

The Dream Chaser is also targeting military applications, although Boeing currently dominates that market with its X-37B orbital test vehicle. SNC believes its spacecraft could be a viable alternative to the X-37B, which is designed for recoverable, long-duration experimentation in space. “We are not part of that programme, although we believe our vehicle can do many of those types of operations [for the US air force],” he says. “It is a larger vehicle that can stay on orbit for well over a year.”

Boeing’s X-37B was launched for the fourth time in May 2015, having previously spent 674 days in space. The spacecraft is almost 3m high and 9m long; Boeing has proposed a scaled up, potentially manned version.

Patricia Hynes, curator of the Las Cruces gathering and director of the New Mexico Space Grant Consortium, tells Flight that she sees SNC as pursuing a long-term set of opportunities, going even beyond the 2024 end of the space station programme: “They believe very much in what they’re trying to accomplish. They believe very much in the vehicle and the potential markets the vehicle will open up.”

But, she warned: “They have to be relentless. If you give up, then it’s over.”