With the Airbus A320neo recently entering into service, how successful have the two engine manufacturers been in winning customers to power the re-engined twinjet?

Unlike the Boeing 737 Max where CFM International has exclusivity, there is a choice of two powerplants for the A320neo: incumbent supplier CFM (the GE/Snecma joint venture which has been on the A320 programme with its CFM56 since the start) offers the new-generation Leap-1A engine, against Pratt & Whitney with its PW1000G geared turbofan, which for the A320neo is designated PW1100G-JM.

Pratt & Whitney is a newcomer to the A320 programme in its own right but has been involved from the early days through the International Aero Engines consortium and became the majority shareholder in 2012 when it acquired Rolls-Royce’s stake.

By March 2016, analysis of Flightglobal’s Fleets Analyzer database showed that the Neo family had amassed 4,502 firm orders from 60 airlines and lessors. Of these, engine choices have been announced for 2,856 aircraft, 63% of the total.

The operating lessors are an important component of the Neo customer base and to the success of a new type. With 984 orders to date, 11 lessors have a 22% share of the orderbook. Their engine choices to date are 34% Leap, 28% P&W and 38% to be decided. However, excluding GECAS who only orders CFM, the lessor share swings to 32% P&W. Most lessors will order a mix of engines to meet market demand and maximise liquidity of their portfolios.

Eight customers have actually chosen both engines for 552 orders, 58% of which are for P&W. They also hold another 229 orders with no engine selected yet.

All are lessors except for one airline, Lufthansa, which is following the same practice it has on the A320ceo family where it uses both the CFM56 and V2500. While Lufthansa only has the V2500 on the A321ceo, for the next generation it has chosen a mix for both A320neos and A321neos. Lessors are flexible and have to use liquid assets, so they usually select both engines where a choice is available, to maximise attractiveness to lessees. 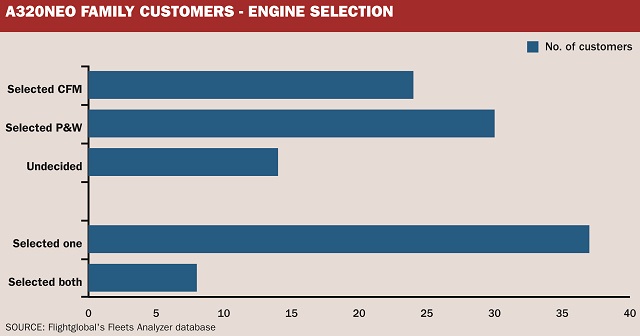 The engine business is fiercely competitive and customer loyalty is a crucial factor. To date, 18 customers who have either the CFM56 or V2500 on the A320ceo family have remained with the same suppliers for almost 1,500 Neos.

Nine CFM A320ceo customers have ordered 995 Leap-powered A320neo aircraft with a further 100 ordered by Avianca yet to have a choice announced. Nine customers with V2500s powering their A320ceos have remained with P&W on the Neo, accounting for almost 500 orders – 38% of their backlog. Again, one customer, IndiGo, has yet to reveal a choice for another 250 orders.

The number of customers who have changed their supplier compared to their current A320ceo fleet is relatively small to date – just eight airlines (five CFM and three PW) for 392 aircraft, a mere 9% of the backlog.

Six operators currently using both CFM56s and V2500s on their A320ceo fleet have decided on one supplier for 254 Neos – the largest being American, which chose the Leap despite operating almost 250 V2500 versus 150 CFM56 aircraft. LATAM Group, which has slightly more CFM56 types as a result of the LAN and TAM merger, has decided on the P&W engine for its orders.

Airbus and Boeing are fiercely competitive in the single-aisle market and the battle to win customers away from the competition can be intense. However, of the 60 current Neo customers, only five are new to the A320 programme, accounting for just 185 orders or 4% of the backlog. This is very indicative of aircraft-family loyalty when it comes to placing new orders.

Norwegian has 100 orders for Neos and has selected P&W for half of them; it has been an all-737 single-aisle operator to date but has chosen both Max and Neo for its future needs; albeit the airline’s initial Neos will be leased to other operators through its Irish-based leasing entity. 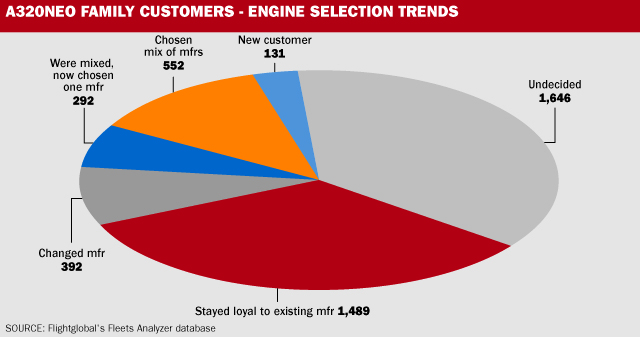 Korean Air is a recent A321neo customer and has chosen P&W, as has Hawaiian which is adding 16 A321neos to its widebody fleet to serve US West Coast cities. Azul in Brazil is stepping up from Embraer 195s to 35 Leap-powered Neos. Israeli charter operator Arkia will replace 757s with A321neos but has yet to choose an engine for its four.

Interestingly, none of these customers are switching from the 737 to the Neo, although Airbus has seen Air Canada and SilkAir switch in the opposite direction, from the A320ceo to 737 Max.

SITTING ON THE FENCE

There are still 13 airlines and lessors who have not yet made any choice for their combined 373 aircraft, including Wizz Air (110) and IAG (102 for subsidiaries British Airways, Iberia and Vueling). A further 479 aircraft have been ordered by unannounced customers, with choices yet to be revealed. Many of these orders are believed to be for Chinese customers.

Interestingly, the engine battle in the A320ceo sector is not done, with a fifth of the approximately 1,000 aircraft remaining on backlog still to play for. The CFM56 has been selected for around 45% of the A320ceos still on order, and the V2500 for around a third, while the remaining 21% of the backlog is yet to be allocated.

In terms of sales, neither the Leap nor the PW1100G currently has a clear advantage and there are still almost 1,650 orders for which a decision is yet to be made.

Looking into the longer term, the Flightglobal Fleet Forecast is predicting demand for at least 9,800 Neos in the next 20 years, which equates to an open market for 5,300 more aircraft. There is an expectation that the better seat-mile costs of the A321neo will lead to a continued upsizing to this type. P&W has promised to deliver a performance improvement package in 2019 with a 2% reduction in specific fuel consumption and has launched a 35,000lb-thrust (160kN) version which has enabled Airbus to launch the long-range A321neo LR, with 30 orders already from Air Lease. CFM is expected to also develop upgrades in future on the Leap.

Currently the P&W engine has a 58% share of the A321neo order choice and if that share can be maintained then the overall engine market share over the longer term may just swing in favour of P&W. It could be a reverse of what is currently on the A320ceo, where CFM currently has a 56% share.

However, it is unlikely that either engine will gain a significant lead over the other, as the market for single-aisles is broad and diverse.